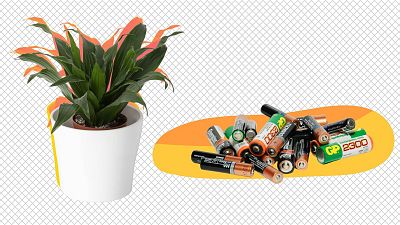 An Australian recycling company is turning old batteries into fertiliser for crops, in an effort to stop them from ending up in landfill.

Around 97 per cent of alkaline batteries in Australia are not recycled, these are the kind we put in television remotes, children's toys and torches. Instead, they end up in ordinary rubbish bins where disposal methods mean the chemicals that provide us with portable power can leak into the soil, causing pollution.

Over in Europe, it’s a different story. Legislation requires shops that sell batteries to ask customers to return them once they run out of juice. This means the percentage being recycled is significantly higher, in comparison to Australia.

For the batteries that are recycled, most power plants use extreme heat to melt down the metals inside them to be used again. But there’s one problem, everything else is burnt off, leaving other elements, which have been mined from natural sources, unused where they could be being repurposed elsewhere.

Envirostream wants to do things a bit differently. Part of Lithium Australia, which recycles all kinds of batteries, it is taking these other ingredients and turning them into something with the power to help plants grow.

“Globally, the disposal of alkaline batteries has become a major problem,” said Adrian Griffin, managing director of Lithium Australia, in a press release. “Our plan for repurposing the active components of the spent cells is not only a significant step towards worldwide environmental management of the issue but could also have a powerful influence on the sustainability of disposable batteries.”

Although some chemicals in batteries are toxic, this new method takes micro-nutrients present in alkaline batteries and turns them into vital food for crops. Zinc, which is present in many alkaline batteries, helps plants to make a chemical called chlorophyll. This is what makes plants green and without it they can’t use sunlight to turn water and CO2 into energy.

How does a battery become plant food?

A similar process has already been employed by Finnish company, Tracegrow, who turn used alkaline batteries into products that enrich soils for growing food crops. It is part of a circular economy plan that aims to minimise the exploitation of the planet’s natural resources by using them for as long as possible.

The batteries are first crushed, then filtration and purification processes remove toxic elements like mercury and nickel. It is important that these don’t end up in the fertiliser as they could make their way into the food we eat so testing of the final product is rigorous. Once removed, they are sent on to be safely disposed of by hazardous waste treatment plants instead of leaching into the soil as they would if the batteries were sent to landfill.

The batteries are first crushed, then filtration and purification processes remove toxic elements like mercury and nickel.

Trace elements are purified and put safely back into nature as products for farming. So far, the fertiliser has been used on tomatoes, cotton and avocados with good results state the company.