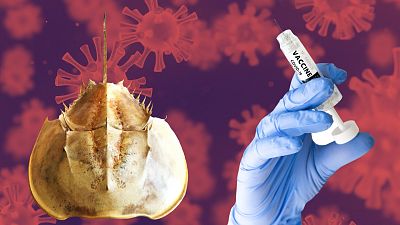 Horseshoe crab blood is used to test the safety of vaccinations and other pharmaceuticals.   -   Copyright  Canva
By Marthe de Ferrer  •  Updated: 20/07/2020

Many countries have been investing in coronavirus vaccinations and one developed by the University of Oxford has shown promising initial results.

But as millions of doses are ordered around the world, there could be one indirect victim of the vaccination: the horseshoe crab.

Horseshoe crab blood has long been used to test the safety of vaccinations and other medical products. Now animal rights activists are calling for alternatives to be used to prevent their numbers from dwindling.

Testing the safety of vaccines

Horseshoe crab blood is a long-standing feature of vaccination research. The creatures’ blue blood is able to detect endotoxins, a substance released by bacteria when they die. These molecules can kill humans if they enter our bloodstreams. It’s therefore important that anything which is likely to enter our blood, like vaccinations, must be tested for these harmful endotoxins.

The crab’s blood has a measurable reaction to the molecule, which means it is an efficient way to screen the safety of these kinds of medical products. However, activists have been pushing for a synthetic equivalent called recombinant Factor C (rFC) to be used instead for testing purposes.

Campaigners were hoping to see a permanent change to the synthetic alternative, but a key player in the US pharmaceutical industry has renewed its backing for horseshoe crab blood. US Pharmacopeia, in Maryland, US, has a significant influence on the drug industry worldwide and had looked to be moving towards supporting a synthetic alternative. It withdrew from those plans this week.

An umbrella organisation, the Horseshoe Crab Recovery Coalition (HCRC), has been formed by several conservation and animal rights groups to drive protection efforts for the American horseshoe crab. The coalition’s website explains, “years of overharvest for bait and biomedical bleeding are twin threats facing this iconic species.”

Horseshoe crabs have existed on earth for over 450 million years, predating dinosaurs and flowering plants - as well as surviving five mass extinctions. But since the species' medical potential was discovered and made the industry standard for detecting bacterial contaminants in the 1970s, around 500,000 crabs are harvested annually for this use.

The synthetic equivalent, rFC, was developed in the 1980s, and has been increasingly used in medical research since its discovery. The use of horseshoe crabs, however, remains prevalent.

“It is unfortunate that biomedical research still relies on the harvesting of a vulnerable wild animal population when there is a simple, effective, sustainable replacement,” says Ryan Phelan, a campaigner with conservation group Revive & Restore.

For some animal rights activists, the issue is also with the methods involved in the process. The crabs are not just killed, but drained alive, often in the hope that the animal lives long enough to regenerate blood for further testing.

"Each sensitive crab is mounted onto a rack, a needle is inserted into the tissue around their heart, and their blood is drained,” explains PETA’s science policy manager Dr Julia Baines. “An estimated 50,000 of them die in the process and human interference also means that the species is now vulnerable to extinction."

With all eyes on the development of a vaccination for COVID-19, activists have used this moment to highlight the importance of using synthetic equivalents from an animal rights’ perspective.

“We have formed the HCRC with the intent of calling public attention to a growing crisis along our shores,” explains wildlife biologist Larry Niles, who is one of the group’s leaders.

“Despite years of conservation work by government entities and non-profits who care about the health of our shoreline ecosystems, we are not seeing the results we need. Action must be taken now, or species like the horseshoe crab will disappear from our landscape forever.”

Largest test of experimental COVID-19 vaccine begins in the US