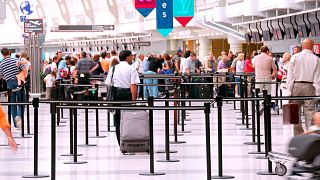 In China, normal life is starting to resume after the country was on strict lockdown for a matter of months. But as a result, a new phenomenon of COVID-19 induced ‘revenge spending’ has swept the nation.

One Hermès flagship store in Guangzhou made €2.4 million on the first day it was allowed to open, showing that people are keen to make up for the time stuck inside by spending again.

One sector we are particularly eager to get back to is travel. Globally, air travel decreased by around 40 per cent at the beginning of the pandemic, preventing 344 tonnes of carbon from being emitted. But experts fear an increase in spending on tourism recovery could lead to ‘revenge travel’ as people try to make up for lost time.

When the number of people travelling after the 2008 economic recession dropped, so too did carbon emissions from air travel by around 5 to 7 per cent. Once consumers had the money to travel again, this drop was essentially wiped out by a 6 percent rise in 2010.

What can we learn? A similar rebound may just happen once the coronavirus outbreak is under control. With the pandemic preventing people from taking their usual summer break, many are looking to make up for cancelled holidays. A survey of North American travellers by travel tech company Fuel found that 59 per cent still wanted to travel in 2020 and three quarters were looking to take a holiday in the next 18 months.

But with cases beginning to rise again in Beijing, 60 per cent of flights have been cancelled according to state-run media, limiting travel once again. The threat is far from over, allowing environmental groups more time to call for changes to the aviation industry before a potential travel boom.

Changing the future of flying

Airlines facing financial struggles could be bailed out by governments - but the changing landscape may mean that the money comes with green limitations.

In the UK, 26 campaign groups including Greenpeace wrote to chancellor Rishi Sunak over fears that public money used to help airlines bounce back could cause a spike in emissions. Companies like Virgin Atlantic and easyJet have allegedly asked for millions of euros with “no promises to clean up their businesses or protect the climate” says Greenpeace.

Rather than allowing the industry to go back to “destructive business as usual” the open letter asked the government to impose changes like a Frequent Flyer Levy, which would add higher taxes to flights for people who travel more often.

The industry can’t go back to ‘destructive business as usual’.

With the European Green Deal at the heart of COVID-19 recovery, airlines may see climate change based conditions attached to any money they may receive from governments across the EU. Commission president Ursula von der Leyen says that these companies should be paying for their growing contribution to greenhouse gas emissions, even given the effects of the coronavirus crisis.

“As the global recovery picks up,” von der Leyen told the European Parliament, “global warming will not slow down.”