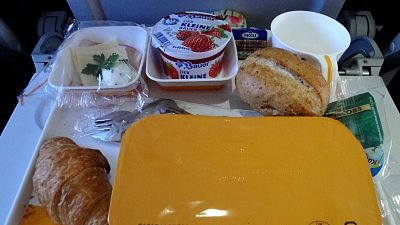 A social enterprise has managed to rescue over a million frozen airline meals which were due to go to waste. The food has been sitting in a warehouse near Manchester Airport, UK, and will now be distributed to disadvantaged people across the region.

Open Kitchen Manchester has been working with food businesses for nearly six years, repurposing food destined for landfill. The 1.1 million rescued meals are set to be sent to those who have been affected by COVID-19, including homeless people, families in poverty, and others in vulnerable categories.

Founder of Open Kitchen Manchester, Corin Bell, says the decision to repurpose the airline meals “was a no brainer”. Though admittedly “on a much bigger scale” than the enterprise’s usual workload, Bell explains that their mission, ‘Feed Bellies, Not Bins’, is more relevant than ever. Fortunately they were able to receive support from a local logistics company who lent the use of their industrial-size freezer to help preserve the meals for as long as possible.

This isn’t Open Kitchen’s usual remit, however. While they do work with restaurants and other companies to save potentially wasted food, the organisation usually runs as a catering company, providing food for corporate and social events. The profits are then used to subsidise their community-based work with vulnerable people across Greater Manchester.

But, as Bell explains, “when COVID-19 hit, the catering business was dead in the water,” so the team quickly pivoted its focus.

“Food waste started to go through the roof and the number of people who needed our help rocketed,” says Bell. “So the team decided to pitch in and just start cooking. Four weeks in and we’re producing 11,000 meals a week to support vulnerable people.”

Food waste expert and environmental campaigner Tristram Stuart praises the work of Open Kitchen, “they are demonstrating how the disaster of food waste can often be converted into an opportunity to help those most in need.”

Stuart also argues that this is an opportunity for a shift in perspective around food security more generally. He says, “this global awakening might just mean that we have a chance of emerging from the COVID crisis with the mindset needed to overcome the global ecological crisis as well.”

Although food waste has become a growing conversation in the midst of the coronavirus pandemic, as restaurants and other organisations are left to deal with an extensive surplus of food, it is an issue which extends far beyond our current situation.

Approximately a third of food produced for human consumption is wasted - something which has significant implications from an environmental perspective. If food production were a country, it would be the third highest emitter of greenhouse gases, according to Friends of the Earth. And in the UK alone, more than 10 per cent of carbon emissions come from “perfectly edible food going to waste,” Bell highlights.

There is a social side to this waste too, as in stark contrast to the tonnes that are wasted, millions of people going hungry each year. The International Food Waste Coalition (IFWC) estimated that the food wasted each year on a global scale would be enough to feed almost 3.5 billion people - nearly half the world’s population. There are currently an estimated 820 million people worldwide who don’t have enough to eat, according to the UN’s Food and Agriculture Organization (FAO). The amount of food wasted each year is enough to feed all those in need more than four times over.

What can be done?

Bell cautions against anyone without extensive experience in this field trying to replicate what her team at Open Kitchen Manchester has done with airline food as the coronavirus crisis continues.

“If food waste isn’t handled safely by people with commercial food handling or prep experience, it could put an already-vulnerable person at risk of food poisoning,” explains Bell. Instead she suggests that people look to support existing and established food waste projects in their cities, which are increasingly common across Europe.

In fact, just this week a new app called MUNCH was launched to help connect people with food banks across the UK, both for service users and those looking to donate. The service aims to work as a one-stop source of information to help tackle the food security issues caused by the pandemic.

On an individual level, there are other apps which have been developed to help minimise food waste, through connecting people with restaurants or providing a database of recipes. We can all work to ensure our food lasts as long as possible, especially during isolation.

When it comes to companies’ responsibility in relation to food waste, Stuart concludes that the current crisis is an opportunity for corporations to support those most in need. He says, “during the acute disruption of the COVID crisis, all businesses that have surplus food should do their best to redirect unsold stock to charities serving the most vulnerable.”