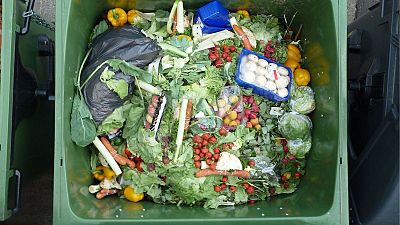 Each person in Germany throws away more than 55kg of food every year, according to the government.

A third of that figure is fruit and veg. When sent to landfill, decomposing food produces methane. Like carbon dioxide, methane also a greenhouse gas, but it’s more than 20 times more potent in its potential to trap heat.

It makes incinerating food seem a more environmentally-friendly option. But whenever food isn’t eaten, the greenhouse gases that went into its production are all for nothing.

"There are about 11 million tonnes (of food) we throw away, that is more than ten thousand truck loads - just imagine that,” says Julia Kloeckner, Germany’s minister for agriculture and consumer protection.

“And that amount is the same as six million tonnes of CO2, it's an unbelievable amount. After all, we have important resources in these foodstuffs and if we throw them away it is really something that is difficult to justify ethically."

It comes as the German government launched a phone app offering recipes by celebrity chefs made specifically for left-over groceries which otherwise may be discarded.

It wants to reduce food waste by half by 2030 and chancellor Angela Merkel is appealing to all citizens to support initiatives that tackle food waste.

The Too Good To Go app, which was created by a couple of Danish entrepreneurs in 2015, has a rapidly growing number of users.

They are among those looking for innovative ways to help protect the environment.

The company says the app is downloaded by more than 5,000 Germans each day.

It's also available in ten other European countries including Denmark, France, the UK and Poland.

Hit play on the video above for more.

How is food waste regulated in Europe?