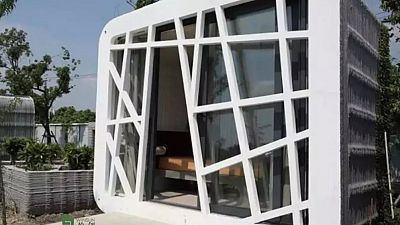 Companies in China have rolled out miniature isolation pods for hospital workers and those taking refuge from the spread of Covid-19.

The tiny homes have been 3D printed by Winsun 3D, which has donated more than 200 pods and 15 larger wards to prevent the spread of diseases.

The company uses non-traditional materials for its 3D constructions, shunning sandstone cement in favour of debris such as industrial and construction solid waste from urban demolition.

These buildings have been hailed as an ideal temporary measure to slow the spread of the pandemic, as printed small buildings can be flexibly moved because no foundation is needed. They can be transported by truck and crane, then moved on to other places when no longer needed. Alternatively, they can be broken down and reassembled, or the building materials can be recycled and used sustainably elsewhere.

Each of the pods and wards contain 'ecological toilets', which are designed to flush without water. Meanwhile, it's not connected to the outside world and will not be discharged into the sewer, so it will not pollute the outside environment, instead using organic bacteria to break down the matter and keep it isolated from the general population's sewage systems.

It builds on the work of researchers in Nantes, France, who have also developed tech to build homes in short spaces of time to provide emergency shelter in times of catastrophe. Their robot is capable of manufacturing emergency housing measuring three by seven meters in less than 30 minutes. A system that enabled the construction in 2018 of the first 3D printed social housing in France.