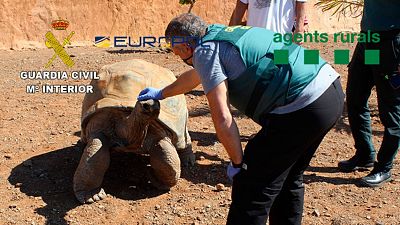 More than 350 rare and protected reptiles have been saved by the Spanish Civil Guard (Guardia Civil) from wildlife trafficking in raids carried out across the country.

Among the rescued reptiles were giant tortoises, a species which can live for up to 200 years. The endangered animal is only found on two remote groups of tropical islands including the uniquely biodiverse Galapagos Islands.

One of the biggest threats to giant tortoises is illegal trading for animal collectors and the pet market, according to the IUCN. Despite roaming the planet for hundreds of millions of years and surviving several extinction events, they can now only be found in small isolated pockets.

Critically endangered radiated tortoises, lizards and a number of other reptiles were also recovered by the Spanish police. Each of the two rare tortoise species can be worth up to €30,000 when sold on the black market.

The rescue mission was part of a coordinated effort between law enforcement from Germany, Italy, the Netherlands and Sweden with the animals being smuggled from all over the world. Traffickers have a number of ways of bringing the rare species into Europe.

Rare tortoise species can be worth up to €30,000 when sold on the black market.

“The suspects smuggled reptiles from Australia, Brazil, Mexico, South Africa and the Middle East,” says Europol. “They concealed the reptiles in personal luggage or even under their clothes.”

Reptile eggs smuggled in this way were then hatched and used for breeding purposes. Veterinarians were also discovered to have been creating fake documents for the animals so that they could be easily sold on once brought into the country illegally.

“A network of veterinarians helped the criminals by forging documents to conceal the true origin of the animals,” Europol adds.

The rise of environmental crime

The Guardia Civil says that environmental crime has become “one of the most lucrative activities, moving billions of euros every year.”

Spain is a gateway into Europe for animals like these. It’s a “critical situation that authorities around the world have already taken action to combat this loss of biodiversity,” say the Spanish authorities.

Earlier this year a report by the European Environmental Bureau (EEB) demanded that the EU step up its investigations into environmental crime. Illegal logging, mining, waste dumping and the trade of wildlife is thought to be worth up to €218 billion every year.

“Environmental crimes are costing us billions as well as costing the Earth, it’s not acceptable that criminals are getting away with these crimes, or only receiving low sanctions if they are caught,” says Francesca Carlsson, EEB Legal Officer.

“We need more resources for law enforcement all over Europe to ensure that environmental crimes are adequately investigated and punished.”