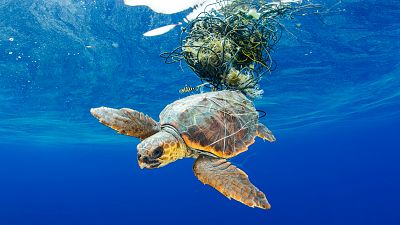 It can take just one shocking image to rally an entire movement behind an environmental cause. Emotional pictures of sea birds feeding their chicks with toothpicks and cutlery from the now-famous Blue Planet II helped encourage companies to ditch single-use plastics in droves. Footage of a turtle with a straw stuck up its nose moved us all to turn to paper and biodegradable alternatives. A picture undoubtedly paints a thousand words when it comes to environmental causes.

A competition seeking the best underwater photos has been finding just how powerful these kinds of poignant images can be with the introduction of their new “Conservation” category. Entries from 78 different countries were considered by the Ocean Art Underwater Photo Competition in categories that ranged from water art to reef scapes. Scott Gietler, publisher of the Underwater Photography Guide which organises the award, said the entries to this new category were “standout” and would help to encourage young people to care more about the state of our oceans.

The award’s organiser praised this year’s submissions as particularly exceptional making it difficult to choose the eventual winners. “Especially the Conservation category,” explains Gietler, “the winning images produce powerful emotion and will influence a new generation of ocean conservation.”

A stark warning for the future

The winner of the Conservation category, titled “The Victim”, demonstrates just how exceptional photography can be as a tool for environmental conservation. Shane Gross discovered this heart-rending scene whilst diving at the Sea Garden in Eleuthera, Bahamas and his first-place photo is a tragic picture of how discarded plastic can kill some of our most endangered marine life.

“My dive buddy came to me in tears talking about a poor turtle that was already long dead, tangled in fishing line,” says Gross. Worried for the safety of other marine creatures that may come across this abandoned fishing gear, Gross returned to remove the discarded lines from the animal. “I took my camera because images like this can become warnings for the future,” he adds, “we don’t want any other turtles, or any creatures, to become doomed to the same unfortunate fate: drowned and wasted thanks to our negligence.”

Swimming in a plastic soup

With Ocean Conservancy estimating that 8 million tonnes of plastic waste enters our oceans each year, turtles are not the only victims. Animals that filter their food out of the water can be attracted to the floating debris because it smells like food. A study from 2016 found that the algae these tiny organisms feed on attaches itself to the plastic causing it to give off a smelly chemical which animals further up the food chain use to locate their meals.

Brooke Lori Pyke’s third-place winning shows Reef Manta attempting to filter feed in a “plastic soup” full of rubbish carried by the same currents as the zooplankton they eat. “This particular day out diving in Manta Bay was to become a dive I would never quite forget,” recounts Lori Pyke, “this was something completely different than what I had seen before.” In the rainy season, she explains, “clouds of trash” often float past as they are washed from Indonesia’s rivers into the sea but this was worse than any she had seen before. Everything from food packaging to cups and even sanitary products collect on the surface but even more worrying is the microplastic accidentally eaten by the Mantas as it mimics the zooplankton the mantas love.

After snapping her winning entry, Pyke and her colleagues desperately attempted to fill their pockets with as much of the trash as they possibly could. “There was just so much and it left you feeling helpless and heartbroken,” she laments, “it was an immensely eye-opening moment for everyone I was diving with at the time.”

The biggest threat to marine turtles

A shockingly common theme amongst the entries is the damage done by abandoned fishing gear. Francis Perez’s fifth place photo shows a loggerhead turtle dragging a large bundle of so-called ‘ghost gear’ as it swims off the coast of El Hierro, in the Canary Islands. “Entrapment in nets intended for other species, and in gear left abandoned by fishing boats is a prime threat to marine turtles,” writes Perez in his entry.

These “floating death-traps” kill and injure more than 100,000 whales, dolphins, seals and turtles every year according to World Animal Protection. As they are designed to trap animals so that fishermen can bring in their daily catch, it is often impossible for marine life to escape once they become tangled. Turtles, in particular, are vulnerable to becoming weighed down by the netting preventing them from reaching the surface to breathe. The Northeast Atlantic sub-population of loggerheads which live around the Canary Islands are especially endangered thanks to extensive human activity on coastlines in Europe.

The winning photos weren’t all tragic tales of environmental damage, however. Captured in East Bali, Indonesia, Nicole Helgason’s fourth-place shot shows how conservation work can reverse the damage done to our ocean’s ecosystems. “Acropora robusta is an important coral that lives in the shallowest parts of the reef,” Helgason explains, “This species of coral grows into robust sturdy branches that not only provide habitat for many marine creatures but also act as a buffer for wave energy.”

Workers at the coral nursery grow these fragments for 12 months until they reach a sufficient size to be replanted back on the reef. Wading through the knee-deep waters, Helgason took this picture just after sunrise when the light reflects beautifully off of the nursery. “The particular nursery is located in a shallow bay so that the corals can be easily cleaned and fragmented during low tide,” she says. Ocean Gardener, the NGO working in this area, has been regenerating reefs around Indonesia using these sustainable coral farms. Working with families around the country not only do they restore marine biodiversity but also hope to provide a source of income for thousands of people.

Winning entries from all categories of the 2019 Ocean Art Contest can be found on the Underwater Photography Guide’s website alongside a number of other specially mentioned images.