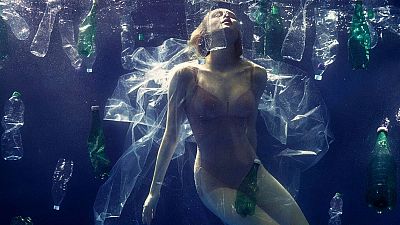 British photographer Elisabeth Hoff addresses the climate crisis in her own way, reminding us we’re drowning in plastic. She calls her work, ‘a beautiful take on a dirty subject.’

Elisabeth Hoff has released a body of work in honour of the Great British Beach Clean (GBBC), an annual event organised by The Marine Conservation Society. The haunting photos, entitled ‘Drowning in Plastic’, are intended to motivate viewers to stop and think about the amount of plastic we consume in droves.

Featuring a series of female models swimming in murky waters, the shots show the figures tangled in plastic bags and disposable cutlery. One particularly distressing photo features a lifeless woman floating in a glittering array of deflating party balloons.

What were the logistics of shooting underwater?

We spoke to Elisabeth Hoff herself about the logistics of the shoot and how she managed to produce such powerful imagery underwater. She told us how, despite the eerie looking ocean in the photos, she used an underwater studio in Peterborough to ensure the lighting and composition would work.

“I’m used to shooting high-end fashion photography for advertising”, Elisabeth told Euronews Living. Far from the editorial setting she is used to, she was forced to adapt. “Our hair stylist was in his wetsuit all day and we still managed hair and makeup despite the obvious difficulties!”

Describing how she sourced the models for this unusual project, Elisabeth told us, “I wanted the models to have underwater experience so they wouldn’t feel nervous about the shoot. Luckily the two girls I found, Celine and Genevieve, are both ex GB synchronised swimmers.”

Hoff cites one of her favourites as the below shot of the plastic cutlery floating by like minnows, as the model swims past it, telling us that she wanted the cutlery not to be immediately obvious. Speaking as a spectator, you have to look more closely at the image to see the shapes of the knives and forks, as from afar they could simply be a “shoal of sardines”, Hoff points out.

What was her inspiration behind the project?

Hoff speaks passionately about her motivations behind ‘Drowning in Plastic’, asking whether I knew that 100% of turtles tested recently were found to have microplastics in their systems. They can’t tell the difference between plastic bags and jelly fish, a chilling piece of imagery Hoff was keen to recreate.

Talking of her early years, she describes sailing round the world with her family as a child. She is comfortable and familiar with water, seeing it as no obstacle for a photography shoot. Going on to study Marine Biology at university, it is clear Hoff has always cared deeply for the oceans, deciding to focus on single-use plastics for this particular project.

She tells us that The Great British Beach Clean garnered more support than ever before this year, with a rumoured 7,000 more participants compared to last year alone. At the annual event, the British public volunteer just a couple of hours of their time to clean an 100m section of beach and record the litter they come across. In 2018, 494 beaches were cleared by 15,000 volunteers, clearing an extraordinary 8550 kilos of litter from the coastline.

Sandy Luk, CEO of the Marine Conservation Society comments, “it’s thanks to campaigns such as Elisabeth’s, which show the problem though a new, creative lens, that we hope to engage more volunteers than ever.”