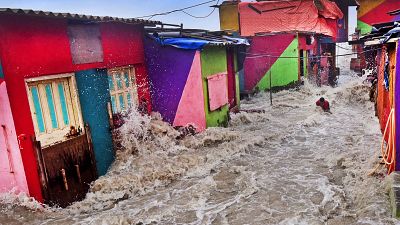 The Environmental Photographer of the Year is an award set up to help expose the impact that human actions have on the planet. In line with the United Nations Sustainable Development Goals, the award aims to recognise work that shows the interconnected nature of poverty, climate action and the collaborative effort needed to tackle the climate crisis.

It is run by CIWEM, a charity that supports members of the water and environmental management industry and is dedicated to working towards a safer, more sustainable world.

"Climate change is the defining issue of our time and now is the time to act. We need to see action from all sectors of society," said Terry Fuller, CIWEM chief executive, "This competition showcases the reality of how people are being impacted by the climate all around the world and aims to spread an important message worldwide to inspire big change."

As well as an overall winner, five other categories were awarded to photographers whose work stood out for highlighting specific area of environmental concern.

The Environmental Photographer of the Year

"High Tide Enters Home", a photograph by SL Shanth Kumar, shows water from a massive wave crashing through the shanty town of Bandra, Mumbai, India. A 40-year old man was pulled from his home and had to be rescued by fellow fisherman. Mumbai faces an ever increasing risk of coastal flooding due to climate change. The city has seen land and sea temperatures rise with a corresponding impact on sea level.

Winning photographer, SL Shanth Kumar said, "As a photojournalist, I am seeing it all unfurl before my eyes. I have seen drought, excessive rain, summers getting hotter and winters getting colder. I believe this change is not good and we need to act now otherwise it will impact the generations to come."

Kenya's government has estimated that more than a million people faced starvation as a result of severe droughts earlier this year. Frederick Dharshie Wissah's photo, titled "Water Scarcity" shows a boy in Kakamega, Kenya drinking dirty water from a puddle. A lack of clean water drinking points has been exacerbated by deforestation in the area. Without access to clean water, the risk of diseases like cholera, typhoid fever and dysentery greatly increases.

As the ocean waters rise the tiny islands of Tuvalu are on the verge of being completely submerged. At just under 2 metres above sea level the islands face a pressing threat from climate change that could leave them uninhabitable. Trees uprooted by waves from the Funafuti Lagoon lie on the beach in Sean Gallagher's "Tuvalu beneath the rising tide".

This picture was once an ancient forest the size of Manhattan, now only 10 per cent of it remains. The Hambach Forest in west Germany is a valuable ecosystem with 142 different species considered important for conservation. It was nearly 12,000 years old when it was bought by a power company to mine the brown coal that lay beneath it. Here J Henry Fair shows what "Remains of the Forest" after the ground has been plundered for fossil fuels.

The air quality in Mexicali, Baja California is badly impacted in part due to the local economic activity that results from sharing a boarder with the USA. Mexican health records show that an estimated 300 people die each year from air pollution in the city each year. On 1st January 2018, Mexicali was one of the most contaminated cities in the world. Eliud Gil Samaniego captured this incredibly thick layer of pollution in his winning photograph, "Polluted new year".

Young Environmental Photographer of the Year

Neville Ngomane, got the rare opportunity to witness "dehorning" in Limpopo, South Africa. "It is not easy to watch but this is a last ditch attempt to keep rhinos safe from poaching," the young photographer said. Experts recommend conservationists carry out this striking procedure ever 12 to 24 months to prevent them from being killed so that their horns can be sold for traditional medicine.

Listed here are a few more incredible shortlisted entries for the prize. Although not winners, they still paint a picture of the reality that faces many across the globe as they face the impact of climate change.

Underwater Cleaning in the Bosporus within the 'Zero Waste Blue Project' in Istanbul, Turkey.

In the Sisdol landfill, Nepal waste pickers rummage through garbage all day long looking for materials or valuables to sell. This temporary landfill located near Kathmandu has been in operation since 2005. Today it is running out of its capacity.

This picture of "crown shyness" where the canopies of fully developed trees do not touch each other was not easy for photographer Ian Wade as he captured the trees in Somerset, UK. He said; "photographing trees at night with a long shutter speed and 4 LED spotlights isn't easy, the tiniest amount of wind will blur the canopy. It took me 5 long nights to capture this image. But it was well worth it, the final image shows the trees in all their spender."