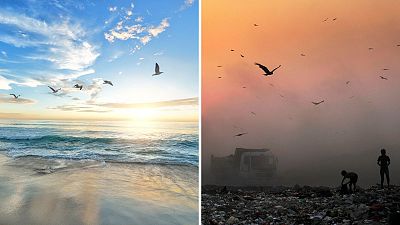 With air pollution a major source of illness and disease, a gap in the market for air purifiers has been seized upon by entrepreneurs. Companies have started to come up with some innovative solutions for the future, presenting at the world’s largest consumer tech conference in Las Vegas.

Existing concerns around air pollution have been intensified by the news of devastating Australian bushfires. Poor air quality caused by the resulting smoke poses a serious risk for health, travelling thousands of kilometres to threaten millions of people in Australia and beyond.

It means that no matter where in the world you live, airborne pollutants of various sources are a worry. In Europe, for example, around 17% of the urban population was exposed to levels of particulate matters above the daily recommended limit last year, according to the European Environment Agency.

Therefore there is a growing market for innovative solutions to clear the air, such as a collar and the accompanying chaise longue which encapsulate the user within a bubble of air that provides the optimal conditions for their own body.

One company chose the Consumer Electronics Show (CES) in Las Vegas to demonstrate the power of nano gas sensor networks. AerNos deployed its nano gas sensors to the fair to monitor the air quality and give first-hand information to the visitors, hence raising the awareness of the issue.

Another wearable air purifier called the Atmos has just been presented on the fair, as well. A New York-based startup AO Air displayed their latest innovation: a plastic model, that goes over your mouth and nose helping you to purified air. It comes with a mobile app too, which alerts you when the air quality changes.

"This is a personal, portable air purification system. Whether you are in Sydney suffering from the wildfires and the smoke or in Seoul and wanting to take your daughter out, playing in the park," said the founder of AO Air Dan Bowden.

Learn more about the AO AIR Atmōs wearable air purifier in the video.

From castles to cabins, these homes were made of waste

Should you pay to refill your water bottle?