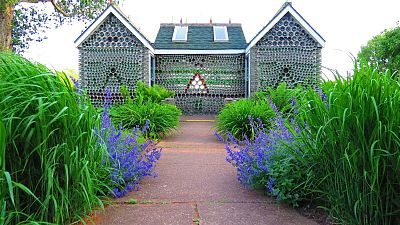 One man's trash is another man's treasure - and some people build a house out of it. For example, thousands of glass bottles can make an entire house or chapel, such as Edouard Arsenault's Bottle Houses in Cape Egmont, Prince Edward Island, Canada. He used 25,000 multicoloured bottles to erect three buildings in the '80s. Today it is a must-see tourist attraction.

If there is no glass, plastic bottles can make a very fine alternative. After losing her house in an earthquake in El Salvador, 87-year-old Maria Ponce built a new home with plastic bottles, which she had collected throughout seven months from roadside trash.

Wood, rocks and even an old bus can make a very unique house, such as the one in Japan, photographed by Christoph Rupprecht, a geographer from Australia, according to whom, this quirky house was built entirely out of discarded trash and recycled materials.

Unable to find a suitable house, Egyptian Taymour El-Hadidi made a big step towards his dream of having an environmentally friendly home in 2012. Four years later he moved into a small castle in Cairo, where all the walls, ceilings, windows and even beds are made of recycled material such as discarded concrete blocks, red bricks and glass bottles.

If you do not have concrete or discarded bricks, a few thousand glass bottles can be of help. Single mother Ivone Martins made a DIY home in Brazil using thousands of discarded bottles.

Hit play the video above to learn more about these homes made of garbage.