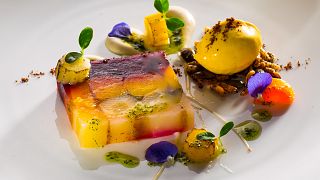 These menus will be part of a four day celebration of locally sourced produce which the group hopes will inspire people to think more about our food system. According to the Food Climate Research Centre, the food system contributes between 20 and 30% of global greenhouse gas emissions.

Not-for-profit, Slow Food, a partner in this endeavour, was founded in the 1980s to defend regional food traditions. By linking the enjoyment of food with a commitment to the community and the environment they hope to protect biodiversity in food sources.

The Food for Change event, taking place from the 3rd to the 6th of October, hopes to encourage chefs at the hotels taking part to create menus with food from local producers to both protect food heritage and also combat climate change caused by food miles. Each hotel taking part will be creating a menu using locally sourced produce that will be unique to its own setting.

Read More | My eco job: running a vegan cafe in one of London's trendiest boroughs

Chef Steven Titman of Summer Lodge, Dorset has created a menu that includes Dorset Blue Vinny, a locally produced 300-year old cheese. The cheese was originally a stalwart of local cuisine that was made in every farmhouse but the recipe was nearly lost during World War II. Titman has based his dish around this important cultural food, “I love cooking with Dorset Blue Vinny – it’s such a rich and versatile cheese supplied by our trusted local producers. I’m thrilled to showcase the heritage of Dorset Blue Vinny using an espuma culinary technique, and served with marinated beetroot and a port reduction, at a time when our guests are more conscious than ever about the origin of their food.”

More and more customers are conscious of where their food has come from with many keen to alter their diets to reduce their carbon footprint. Consumer research for TUI last year found that 51% of UK holidaymakers are looking to book with more environmentally friendly hoteliers.

Hilton Hotel group recently announced that as part of its Travel with Purpose initiative it too would be looking to source local produce for its hotels as well as looking to "promote plant-based dishes". With potential guests increasingly conscious of how their holiday might impact the environment, it's not surprising that destination restaurants are changing their menus to reflect this trend.