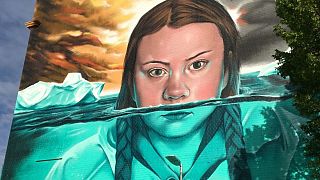 The Swedish teenager who has challenged the status quo over the last year by sparking an eco-activism movement at just 15, has been honoured by a large-scale artist in Bristol, UK. Aerosol artist Jody Thomas has painted a 15-metre-high tribute to the young campaigner, to immortalise her influential contributions to the environmental movement.

Much like the Banksy mural that appeared mysteriously after climate change protests in London last month, Jody Thomas’ artwork invites a similarly emotive response, this time on a far larger scale. The powerful piece of art features Greta, now 16, mostly submerged in ice cold water, surrounded by melting ice caps and a stormy sky. Thomas worked tirelessly for over two weeks to create the mural, which forms part of Europe’s largest street art festival, Upfest. His Instagram post below shows the process from start to finish.

Why is Greta Thunberg such an inspiration?

This astonishing Swedish schoolgirl has spurred on talks all over the world, around how to fight climate change on both an individual and societal level. Her initiation of a mass-movement school strike in November 2018 meant that she was invited to speak at the United Nations Climate Change Conference (COP24) in December, unafraid to incite panic in politicians.

“I want you to act as if the house was on fire”.

It’s no surprise that she hails from Sweden, the Scandinavian country that has already pledged to be carbon neutral by 2045 in what some are calling ‘the most ambitious climate law in the world.’

An estimated 1.4 million students in 112 countries around the world have used Greta as an incentive to strike, sparking a mass school walk-out on 24 May 2019, part of her #FridaysForFuture movement. The teenager has since been nominated for a Nobel prize by three members of the Norwegian parliament and she has even made the front cover of Time magazine. Greta Thunberg can teach us a lot about our approach to battling the climate crisis; she is a palpably passionate orator who is fiercely determined to effect change.

Artist Jody Thomas commented that this was the "biggest wall I’ve done to date, the feedback and comments I’ve had from everyone has been incredible from all ages and backgrounds - art is always such a great unifier."

He described the teenager to the Huffington Post in the words,

“She’s very much in the limelight, very current, very contemporary and she’s obviously clearly leading a very, very important issue which affects all of us on the planet. She has a very fearless style, tells it exactly how it is and lets everyone have it with both barrels.”

Greta Thunberg and The 1975 release rallying cry for climate rebels