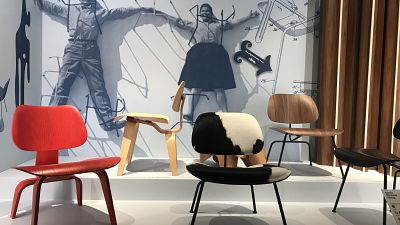 Design, culture and quality are some of the words that describe the Salone del Mobile Milano, the leading international and trendsetter furniture and design event.

“There is just nothing like it," says Marva Griffin, head of the SaloneSatellite, the event’s space dedicated to under-35s talented designers.

The equivalent for fashion week in furniture, the Salone flags design concepts to the design community worldwide.

“It is during these few days that the initial, virtuous and fruitful dialogue between productivity and creativity that will inform great projects over the coming months is sparked,” says Claudio Luti, President of the Salone del Mobile.

“You start noticing very particular people as soon as it begins,” a Milanese local told Euronews. Il Salone attracts around 400,000 people every year, among them: creatives, entrepreneurs, journalists, collectors, critics, designers and architects.

More than 2,000 companies come to showcase furnishing products that range from classic to futuristic, under the shades of greatly produced theatrical looking stands and displays.

The Salone del Mobile, which took place between 19-22 April, translates into maximum quality, but quality not only as a synonym of beauty and durability but also of sustainability. Beyond the green sustainable aspect, the creations take into account the end of life of the object.

From energy efficient refrigerators to dishwashers, screwless furniture and "bio", or organic, chairs: the Salone demonstrates how creating design means thinking about the future, not just in terms of materials, but holding superior quality standards and a creative process that recognises that good design will endure over time.

Aside from the sustainability revolution, what approach will design take this year?

The Salone said in a statement: “There is no one single approach, but many different, and in fact the lack of a well-defined trend should be seen as the driving trend.”

The absence of "unidirectional approach" should be stressed, but there are still various characteristics that are definitively part of 2018's trends.

Designers are bringing back the great pieces from the past — but reworked.

The Salone explains how the trend comes braided with the general public that has a deep fascination for their historical past. Apart from the obvious recognition of ancient elegant design.

Scandinavian style is among the favourites re-worked.

Coming from the same fascination for the past, many designers are rediscovering pieces because of their size. Enchanted by the vintage lines but troubled by their dimension, creatives are transforming the pieces and suiting them to a domestic size, suited to the environment where they’ll be.

A phenomenon that’s said to be related to the "selfish" Millennial generation, mirrors were everywhere at the Salone. From emerging designers to well-established brands like Edra. Mirrors reigned supreme.

From cushions to fragrances, prints and lines, the influence of East Asia was present in the Salone, especially with the wildly popular wallpaper.

There was no lack of fantasy-themed furniture. Justified by a phenomena parallel to design, such as fashion and cinema, it was particularly common in ceramics and fabrics.

Fabrics are evermore important, from African drawings to 18th-century prints: sofas with exotic birds and dragons were almost as common as the sofas themselves.