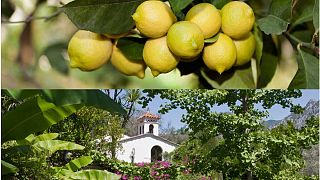 Grown exclusively in the French Riviera, the lemon of Menton is gaining popularity among chefs worldwide. Its scent heralds the imminent arrival of spring, as the locals say.

As legend has it, while fleeing from Paradise with Adam, Eve, took one of the “Golden Fruits” with her and later she planted that in the soil, and from this, Menton was born.

Today, in Southern France between the sea and mountains the countryside is blanketed with a "lemon tree forest". The area generates between 150 and 200 tonnes of fruit annually.

The eastern exposure, as well as the optimal weather and soil, create a citrus with a special character. Local farms have been supplying exclusive restaurants for over 40 years.

In Menton, it is all about the local lemon

The company is one of the biggest jam producers in the Menton area and boasts 180 different types of marmalade. The Maison's founder took local marmalade recipes from the early 1900s and made them the basis of her jam business.

In its 85th edition, the Lemon Festival of this year was inspired by India and the world of Bollywood. Events included a citrus floats parade and an exhibition of oversized statues made with thousands of lemons and oranges. This parade attracts almost 200 000 people every year from all over the world.