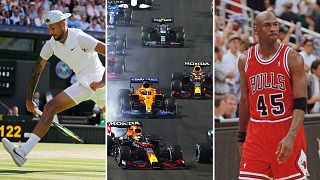 In recent years, sports documentary series have become all the rage, as more and more sports fans seek out in-depth looks at the lives and careers of their favourite athletes and teams.

Notably, Netflix are just about to release Break Point, a 10-part docuseries, which offers unprecedented access to some of the world's most celebrated tennis players.

The first five episodes of the series, which is created by the makers of Formula 1: Drive to Survive, are set to release on the streaming platform on Friday 13 January.

While you wait for its release, we've put together a list of some other highly recommended sports documentary series that are currently streaming online. Be ready to indulge your inner sports fanatic.

The Last Dance (2020) follows the Chicago Bulls during their 1997-1998 championship season, with a focus on the team's star player, Michael Jordan.

This series has it all: drama, rivalries, comedy, and of course, top-notch basketball action.

But let's be real, you're probably not just watching this for the sports. You're in it for the juicy behind-the-scenes footage and interviews with Jordan and the rest of the Bulls. And let's be honest, who wouldn't want to see how the legendary Jordan spends his downtime? (Hint: it involves a lot of gambling and trash talking.)

Whether you are a die-hard basketball fan or just looking for a captivating documentary series to watch, The Last Dance is not to be missed.

All or Nothing: Arsenal (Amazon Prime Video)

The All or Nothing: Arsenal series (2022), available on Amazon Prime Video, offers a unique and immersive look at one of the most popular football teams in the world.

It follows Arsenal Football Club during their 2021-2022 season, offering a behind-the-scenes look at the lives of the players, coaches, and staff as they navigate the ups and downs of a season.

While the series provides a fascinating view of the personalities of the Gunner's many superstar players, Mikel Arteta, the team's coach, is really the star of the show.

From his emotional pre-match pep talks, to bringing loudspeakers onto the training pitch to blare out “You’ll Never Walk Alone” before a crucial match against Liverpool, the series will give you a new appreciation for the role of a  football manager.

And if you're not so keen on the north London outfit, you could always watch another season of the All or Nothing series, featuring Manchester City, Tottenham Hotspur or Juventus.

This series on Netflix is a documentary that follows the competitive cheerleading team at Navarro College in Texas, and their journey to win a national championship.

From the very first episode, it is clear that these cheerleaders are no ordinary athletes. They put in countless hours of hard work and dedication, and their athleticism and determination are truly impressive.

The series does an excellent job of capturing the intensity of their training, as well as the mental and emotional toll that competing at such a high level can take.

It's heart-warming, uplifting, and truly one of the best shows on Netflix. So do yourself a favour and give it a watch - you won't be disappointed!

If you're in the mood for some high-octane, high-stakes entertainment, then you should check out the hugely successful and ground-breaking 'Formula 1: Drive to Survive' on Netflix.

Since its release in 2019, Drive to Survive has become one of the streaming platform's most popular and critically acclaimed documentary series, and has helped to make Formula 1 racing accessible to a wider audience.

Each season of the series covers a season of the Formula 1 World Racing Tour, excellently piecing together the on-track action and off-track drama of F1.

The show does an excellent job of explaining the technical aspects of the sport in a way that is easy for non-fans to understand, while also giving viewers a fascinating behind-the-scenes look at the teams and drivers, including Max Verstappen, Louis Hamilton and Daniel Ricciardo.

Welcome to Wrexham (Hulu and Disney+)

Well Welcome to Wrexham has the answer.

In February 2021, A-list actors Ryan Reynolds and Rob McElhenney took over Wrexham Association Football Club, a small team from the north of Wales, which is documented in the series, which is streaming on Hulu and Disney+.

The show hops from Hollywood to Wales, from pitch to the pub, with the two stars hoping to improve the team and bring positive change to the local Wrexham community.

If you were a fan of the US hit series Ted Lasso, you'll be sure to love this one.

Last Chance U is an extraordinary documentary series that follows the lives of junior college football players and the challenges they face, as they strive to achieve their dreams of playing at the collegiate level.

Each season of the show focuses on a different junior college team, and the players' personal struggles and triumphs are a central part of the narrative.

While Last Chance U is primarily a serious, character-driven series, it does have moments of levity and humour throughout the show. Some of the players have larger-than-life personalities and provide comic relief with their antics and interactions with their teammates.

If you want to get into the show, we recommend the six-episode first season of the series, which follows the 2015 football season of East Mississippi Community College. It is such a compelling and gripping watch, with a finale that will have you on the edge of your seat.

We promise you will not regret checking it out.