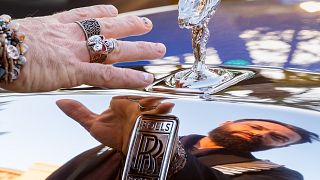 How can an artist remain grounded while working exclusively on command and at the high end of the luxury cars business? It’s a tension at the core of Sacha Jafri’s new work.

When Sacha Jafri’s enormous painting ‘Journey of Humanity’ was sold for more than €58 million in 2021, it became the second most expensive painting of a living artist to go under the hammer at auction.

The work covered 1,595.76 sq metres and was auctioned off in 70 separate sections all bought by Andre Abdoune, a French-Algerian businessman living in Dubai.

Now, the artist has revealed his latest project is a series of modified Rolls-Royce cars. It’s the first time Rolls-Royce has ever co-branded project. For it, Jafri has created six customised Rolls-Royce Phantom Series II cars, each based on a different element of the universe.

Between the colossal artwork depicting humanity’s journey, all sold for millions to a single owner and the customised luxury cars, Jafri’s work could be written off as merely part of the grotesque excesses of the fine art world.

“It's sad, it's the most beautiful thing in our world. And it's often destroyed by that ethos of treating it as a commodity and manipulating its value,” Jafri says, reflecting on the art world.

Jafri doesn’t want his work to be kept in the same conversation. He donated the massive sum taken by ‘Journey of Humanity’ to children’s charities.

For the Rolls-Royce project, four new charities have been involved. Bait El Baraka, Surgeons For Little Lives, The Beekeepers Foundation, and Harmony House are all aimed at improving conditions for people through education, housing, health and environmental sustainability.

As part of the project, Jafri has created an NFT for each of the six unique Rolls-Royces. The NFTs have a version of Jafri’s heart logo. If the owner chooses to sell the NFT on, 20 per cent of the exchange price will be automatically put in a charity’s digital wallet.

The premise of the NFT is that its continual place in the art market will enable charities to keep earning from the project. It’s why Jafri named the initiative ‘The Rolls-Royce That Keeps on Giving’.

“That's where I think the project has serious meaning,” Jafri says. “I like the alignment with Rolls Royce because it's a luxury item. I hope this paves the way for others to come up with similar models whereby you can take a luxury item for the few, and you can actually benefit the many.”

“That's how we reconnect the world because we've got this huge divide of the super wealthy and the impoverished, who are on the breadline, struggling to pay their utility bills, struggling to have water and bread to eat. And that's a disconnect. If we can sort of bridge that gap by creating models in our world that can actually benefit the many, you can close that gap and create a reconnection,” Jafri explains.

The actual vehicles Jafri has modified take the Rolls-Royce Phantom Series II, an oversized and somewhat inelegant space-consuming block of steel, and imbues it with Jafri’s characteristic colourful flare.

Each of the six cars has been modelled after different elements: earth, air, wind, water, fire and Jafri’s own addition: humanity.

The modifications come in five forms. There’s the aforementioned NFT that has its physical form in the glove compartment.

More conspicuously, Jafri has customised Rolls-Royce’s Spirit of Ecstasy, the sculpted mascot that sits pride of place on every Rolls’ bonnet.

“The Spirit of Ecstasy is the holy grail and is not allowed to ever be touched. So we created a revolving base that I designed and that has the six elements on the base. And it revolves to show your element of the car that you have. It's beautiful,” Jafri explains.

Then there are Jafri’s colourful splashes featured on the car’s gallery and the treadplate, with the paint colour of the car and the interior detailing which is entirely unique for each car.

Torsten Muller-Otvos, CEO of Rolls-Royce Motor Cars told Jafri at the launch that “these are the six most valuable cars we've ever created.”

What you think of the final product is functionally irrelevant. All six cars have already been snapped up to “exceptional homes”, a press release states. More interesting is Jafri’s intent to create a difference in impoverished communities through such extravagant works.

A life's work in charity

Jafri was first convinced to work so closely with charities around 15 years ago when he spent five years visiting 42 refugee camps.

He created the ‘Universe of the Child’ series from his experiences with children at the camps. The work sold for “£12 million, which at the time was a lot of money.” Jafri donated it all to the camps and dedicated his work from then on similarly.

“I realised quite quickly after that my work is quite average, when it's not linked to humanity,” he admits. “It doesn't have that magic, that poignancy, that power.”

The charities for the Rolls-Royce project are ones close to Jafri’s heart. The first four have been announced, with another four each year for successive sales of the NFTs.

Harmony House is one of the first four charities and specialises in bringing Indian children out of poverty. Operating two full-time villa communities, Harmony House offers over 1,000 women and children from slums in India somewhere to live with education, nutrition, medical facilities, hygiene facilities, vocational training and social services.

“It's unbelievable when you see a child from the streets of India become a human rights lawyer. If you do that enough times you change the world, because that human being can change their own community easily,” Jafri says.

Meet the jeweller who created this €755,000 diamond dog necklace