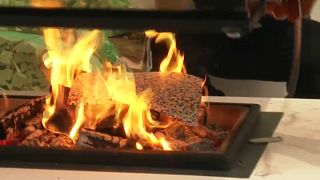 The world-renowned artist Damien Hirst, known for his colourful spot paintings, has burnt hundreds of his works as part of a project he's calling 'The Currency'.

The works he decided to burn are the ones that buyers chose to keep in a digital form, as non-fungible tokens, which are commonly referred to as NFTs.

To the artist, the act is his way of raising profound questions about the essence of art.

According to Hirst, he’s not burning the paintings just because they have sold in NFT form, but because of the age-old artistic dilemma of whether to add more or less to a piece of art which inevitably makes creators run the risk of ruining a piece or feeling like something is missing from it. His burning of the works is “just one of those artistic decisions."

The spotty paintings in question were sold on the basis that buyers had the choice between the paper version or the NFT form.

The price of the works started at around €2000, with some selling for much more than this amount.

Over half the buyers decided to take the physical painting.

Check out the video above for footage of the burnings, as part of 'The Currency'.