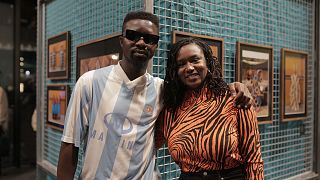 A new exhibition in London presents twisting narratives of race, nationality, and class to challenge stereotypes through the use of satirical art.

At the NOW Gallery in Greenwich Peninsula, the exhibition space has been opened up for six bold artists in photography and film. ‘Human Stories: The Satirists’ presents work by Bubi Canal, Leonard Suryajaya, Nyugen Smith, Thandiwe Muriu, Thy Tran and Stephen Tayo.

“I'm taking a new leap,” Stephen Tayo, one of the artists, says. “This new approach is to say more about my work and the direction I would like to take.”

Like the five other artists involved in the exhibition, Tayo is best known for his commercial photography work that has graced the pages of Dazed, Vogue, The New York Times, Vice, and Interview Magazine. He’s photographed Burna Boy, Davido, and Tiwa Savage, in his eclectic career that has always taken care to represent his home country of Nigeria with an earnest, exciting allure.

When Tayo speaks to me, he’s just left London to go to Marrakech for research. Next stop is home though for Lagos Fashion Week, which just came to a close. In all of his work, Tayo is trying to understand and communicate the culture of Lagos.

For Human Stories, Tayo focused on the language he hears when in Lagos. Mostly, people use Nigerian Pidgin, an English-based creole language that is distinct from the country’s official languages of English, Hausa, Igbo and Yoruba.

Tayo saw how Nigerian Pidgin’s proximity to English can be the source of derision to unfamiliar English speakers.

“Satire in this case helped me to contextualise using the idea of broken English as the title of the work ‘Which Lagos You Dey?’,” he explains.

“Which Lagos you dey?” is Nigerian Pidgin for “which Lagos are you?” and is exemplary of Tayo’s artistic question in the works for the exhibition.

“I wanted to use the idea of broken English to formulate the storytelling because I'm trying to bring originality of place and a sense of place into the story of Lagos,” Tayo says.

There’s also a focus on the colours of the city, he explains. Over his career, he’s always been fascinated by the little details that create a palette of a place, like the street signs and day-to-day fashion.

Tayo’s pieces take people and makes them anonymous, allowing the details of the environment to take over their bodies. Bags, footballs and tinsel envelop his subjects while his camera work blurs the edges of the city and the single-use plastic that defines contemporary Lagos.

The juxtaposition is clearest in his piece ‘Gucci Dey Learn’ where a figure is covered head to toe in plastic Gucci bags. The use of Gucci is purposeful to create a new context for the luxury product, one that Tayo believes isn’t utilised enough.

Still, Tayo is cautious not to ever try to define a city beyond what it means to him.

“I wouldn't sort of generalise Lagos in a way because in space and like every corner of Lagos is diversity,” he says. “I’m just trying to show the Lagos that applies to me.”

See Stephen Tayo and the other artists’ works for Human Stories: The Satirists at the NOW Gallery in Greenwich, London until 13 November 2022.