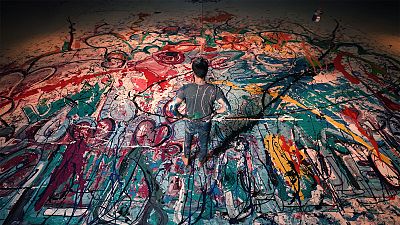 A British artist based in Dubai, who went to Eton with Prince William and whose celebrity clients include Leonardo DiCaprio, has been self-isolating in the Atlantis Hotel for the last 6 weeks creating record-breaking artwork.

Sacha Jafri’s painting ‘We Stand Together – Humanity Inspired’ will raise money for charity, while breaking five artistic all-time world records in the process.

In this week's Cult, he told Euronews' Jane Witherspoon about how it will be the largest single painting (110m x 28m) ever created on canvas.

The artwork, which will be come to life at Atlantis, The Palm, will then be transported to The Dubai Frame where it will be hung for 48 hours.

As part of the project, Sacha is inviting children around the world to submit their own art themed around isolation and connection which will be added to the painting.

"All of these portals will be full of the children’s drawings and artwork that they send in. The idea is that you look through the portals to take you to a better world. And you get there through the hearts, minds and souls of the children of the world," he said.

Once completed the piece will be auctioned and it is hoped it will raise over 20 million euros to support educational resources for children as well as hospitals and healthcare workers.

While Sacha has been keen to raise as much money as possible, he’s also very particular about who owns his work.

"I don’t want anyone to buy it, put it in a safe, store it and sell it four years later, because that’s everything I don’t believe in. I want someone to be touched. I want someone to stand in front of my painting and cry," he said.