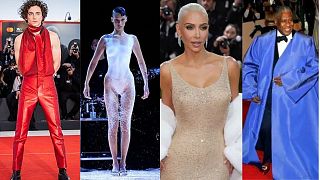 There’s never a dull moment in fashion and 2022 gave us plenty of gossip, viral moments and head-turning outfits.

After the disruption of the pandemic, fashion was back in full swing with the Met Gala returning to its traditional first Monday-in-May slot and catwalk spectacles making a splash as digital presentations faded into the background.

Euronews Culture takes you through the big fashion moments of the year from the icons we mourned, to celebrity controversies and the newly appointed creative directors that you need to know about in 2023.

Whether you loved it or thought it was a reckless use of a valuable item, Kim Kardashian created one of the most memorable red-carpet moments of all time when she wore Marilyn Monroe’s dress at the Met Gala in May. The dress, worn by Monroe when she sung Happy Birthday to President Kennedy, is owned by Ripley’s who paid $4.81 million (€4.51 million) for it in 2016.

The death of Queen Elizabeth II was one of the biggest news stories of the year, but it had a particular impact on British designers as it fell during the most important month in the fashion calendar. Designers, including Burberry and Raf Simons, cancelled their London Fashion Week shows. Others showed their respect with a minute silence, while JW Anderson, Erdem, Richard Quinn, Daniel W Fletcher and S.S. Daley were among those who sent black ensembles, veils and other mourning attire down the catwalk in dedication to the monarch.

Possibly the most notable catwalk moment of the year though went to Bella Hadid at Caperni. During Paris Fashion Week in October the supermodel closed the show by having a dress sprayed onto her live on stage.

Kanye West, also known as Ye, was hardly out of the headlines in 2022 but controversy surrounding the rapper begun to surge when he appeared in a “white lives matter” slogan t-shirt at a surprise catwalk for his Yeezy label. The stunt resulted in walkouts from the show and angry online discourse from supporters of the Black Lives Matter movement. Ye went on to make numerous antisemitic remarks which saw him dropped from partnerships including Balenciaga and Adidas.

It didn’t seem like 2022 would be the year fashion learnt its lesson from working with contentious public figures though. Only a month later, in November, Rihanna’s fashion line, Fenty, sent Johnny Depp down the catwalk just months after the end of his courtroom battle with ex-wife Amber Heard.

More welcome news came from outdoor apparel brand Patagonia whose founder announced he would be transferring his ownership to a charitable trust that funds environmental initiatives. The business will generate dividends of approximately €100 million per year to tackle the climate crisis in the first-of-its-kind move for a fashion business.

Timothée Chalamet created another first for fashion in 2022. In September he became the first man to appear solo on the cover of British Vogue. Chalamet described the photoshoot with Steven Meisel as his favourite to date.

As the year drew to a close, so did one of the industry’s favourite designer labels. In November, Raf Simons stated he would be closing his own-name label founded in 1995. The spring/summer 2023 collection will be the last created by the brand, but the designer will continue his fashion career in his role as co-creative director of Prada.

The loss of legends

The fashion world lost some of its much-loved icons this year.

In January, the former Editor-at-Large of American Vogue, André Leon Talley, passed away aged 73 after suffering complications from a heart attack and Covid-19.

He was known for breaking barriers as an African American in fashion and for his flamboyant style and straight-talking attitude which made his appearances on America’s Next Top Model popular meme fodder.

Following his death, Talley’s 2020 memoir ‘The Chiffon Trenches’ re-entered the book charts with the hardback version selling out.

In the same month, the death of French fashion designer Thierry Mugler was announced. Known for futuristic, gender-bending haute couture, he dressed some of the most eclectic stars of the 70s and 80s including Madonna, David Bowie, Grace Jones and Michael Jackson. His Angel and Alien perfumes are also a huge part of his legacy and have remained consistently popular since they were launched in the 90s and 00s.

In August, the fashion world mourned the death of designer Issey Miyake. Another trailblazer, he was part of a wave of Japanese designers who broke through on the fashion scene during the 70s and 80s. His designs were notable for their simple colours but unusual silhouettes, many of them thanks to his signature pleating.

Creative directors: who’s in and who’s out?

It was another exciting year of both designer debuts and bowing out from fashion’s creative directors with a changing of the guard at Emilio Pucci, Etro, Hugo Boss, Missoni, Nina Ricci, Salvatore Ferragamo, Supreme and Yeezy.

The biggest surprise came from Alessandro Michele who announced his departure from Gucci after seven years. His tenure saw Michele go from a relative unknown outside of fashion’s inner circle to a household name as he revived the fortunes of the historic brand.

There were also changes at Burberry as British-born Daniel Lee, formerly at Bottega Venetta, was announced to replace Riccardo Tisci.

At the autumn/winter 22 Milan Fashion Week, Matthieu Blazy presented his first collection for Bottega Veneta with a focus on craftsmanship, art-world inspirations and use of the brand’s signature leather in unexpected ways.

Nigo, the founder of cult streetwear brand, A Bathing Ape, debuted as creative director for Kenzo in Paris the same season with his modern take on the brand’s archive. All eyes were on the front row though which was filled with famous friends of the designer including Ye, Tyler The Creator, Julia Fox, Pharell and Pusha T, who kept the brand trending throughout 2022.

Burberry, Bottega Venetta and Kenzo will no doubt continue to be hot brands for 2023 as the new designers set out their creative visions for them. But the news everyone is waiting on in the new year is: “Who will take over at Gucci?”

Stay tuned to Euronews Culture next week for our look ahead to 2023 in fashion trends.

Dress to impress? Look ahead to 2023’s Spring-Summer Trends

Upcycling your favourite fashion items could save you lots of cash