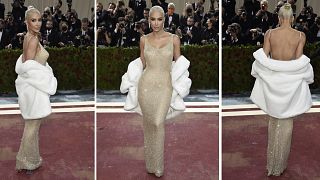 The Met Gala is one of the most photographed events in the world.

The famous carpeted steps of the Metropolitan Museum of Art have been the playground for the stylish and glamorous for decades. What spectacles we have seen!

Rihanna as a bejeweled pope. Zendaya as Cinderella with a light-up gown. Katy Perry as a chandelier morphing into a hamburger. Beyoncé in her “naked dress”. Kim Kardashian in a face-covering bodysuit. Billy Porter as an Egyptian sun god, carried by six shirtless men. And Lady Gaga’s 16-minute striptease.

The guest list strategically withheld until the last minute but you can bet your top dollar on a collection of stars from movies, music, fashion, sports, politics and elsewhere will be on hand to create the highest celebrity wattage-per square foot of any party in the world.

It doesn't seem so long since the last one, and that's because last year's was in September due to a COVID postponement.

Of course, Vogue’s Anna Wintour is supervising the whole shebang as she has since the ’90s. Her fellow honorary co-chairs were designer Tom Ford and Instagram head Adam Mosseri.

Kim Kardashian went for classic and iconic, once again breaking the internet by donning one of Marilyn Monroe's most famous looks.

Kardashian had to lose 16 pounds to fit into the dress, designed by Jean Louis and purchased in 2016 by the Ripley's Believe or Not! museum in Orlando, Florida, for a whopping $4.81 million.

“It was such a challenge,” she said. “I was determined to fit it.”

As usual, the sartorial theme comes from the exhibit the gala launches: “In America: An Anthology of Fashion,” which is the second installment of star curator Andrew Bolton’s two-part show exploring the roots of American style.

This exhibit showcases overlooked figures in fashion history, many of them women and people of color, through the talents of some top film directors, including Sofia Coppola, Martin Scorsese, host King, and last year’s Oscar winner Chloé Zhao. Their work will be displayed in the period rooms of the American Wing, so expect some grand fashion related to the theme — like those gowns from HBO’s “The Gilded Age.”

As guests entered from the red carpet, with crowds screaming outside, they passed a 12-piece chamber orchestra that played American classics like “At Last” until dinner. After greeting Wintour and her celebrity hosts (Blake Lively and Ryan Reynolds, Lin-Manuel Miranda and Regina King) guests wandered through the Arms and Armor galleries toward the American Wing and the huge Charles Engelhard Court, where cocktails were served and where curators built a bridge to access the exhibit in the period rooms.

Though many sipping cocktails and munching on coconut ceviche hors d’oeuvres were gala veterans – from actors like Sarah Jessica Parker, a gala stalwart, to designers like Thom Browne – there were a number of first-timers. One was Kieran Culkin — star of another series about excessive wealth, “Succession” – who professed to not knowing yet what he thought of the gala, because he’d only had time to do three things. “I tied my shoes,” he said. “I went to the men’s room, and now I’ve ordered a Coke — straight Coke. They put a lime in it. Not usually my thing.” He headed off to see the exhibition.

A New York City love story played out on the Met Gala steps Monday with a proposal.

With all the cameras turned to the carpet, Digi Olisa got down on one knee. Met Gala attendees screamed in excitement and shouted “say yes” to the couple. She did.

Take a proper look at the stars of the red carpet in the media player at the top.