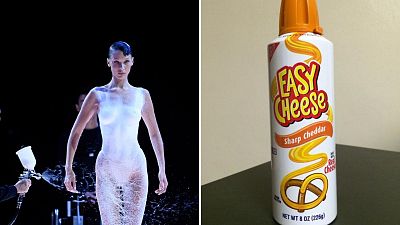 In case you missed it, Bella Hadid just tore up the Paris Fashion Week rule book by wearing a spray-on dress on the catwalk.

She didn’t just wear it though. The supermodel arrived at the Coperni show in nothing but a g-string before three assistants spray-painted a white dress on her.

The technicians spraying the dress onto Hadid used pistols that looked something between a paintball gun and Spider-man’s web launcher to coat the model in a layer of silly string.

It was only when another assistant came onto the stage to cut a leg slit and arrange Hadid’s shoulder straps that it became clear that the model was wearing an entirely new dress.

How Hadid plans to get out of the outfit without it being ripped off her is unclear. While the technology is certainly impressive, it seems to only function for a one-time wear.

Naturally, the internet went mad for the look. Of course it did. The story has something for everyone. A bold style moment for the fashionistas, a new depressing take on fast-fashion for the environmentalists, and an almost entirely nude Bella Hadid for the perverts.

The technology behind the dress is based on Fabrican, a spray-on fabric made up of synthetic polymers, invented by Dr. Manel Torres, who was one of the technicians on stage.

Sébastien Meyer and Arnaud Vaillant are the designers at Coperni who have run with the technology to create Hadid’s show-stopping look.

It’s certainly a jaw-dropping moment for fashion now that clothes can come in a can. But why should we be so surprised that the complex runway of fashion was leading us down this alley?

Canned goods are in, haven’t you heard? As many countries in Europe face cost-of-living crises, fresh goods are out. It’s all about cans.

So, as Hadid can turn heads at Paris Fashion Week with her canned dress, here are Euronews Culture’s other favourite canned goods that deserve to break the internet.

The brain behind Fabrican, Dr. Torres, was supposedly inspired by silly string cans, loved by all of the most annoying people you know every Halloween. But what’s more iconic than those pesky silly string cans? Spray cheese, or cheese in a can.

Easy Cheese, the company which produces spray cheese, proudly advertise on their cans that it contains “real cheese”. Reassuring, isn’t it?

The processed innards of the actual cans are not technically an aerosol, disappointingly. The overly watery cheese ‘solid/liquid/gas/unclear’ is in a separate compartment of the can to the nitrogen gas. It’s also responsible for the new version of the famous rhyme, ‘Easy, peasy, cheesy, kill me now’.

Christmas dinner in a can

If spray cheese is a red flag, this is a war crime.

Sold by Game, a British video game shop - make it make sense - the ‘Christmas Tinner’ is a three-course meal shoved for your convenience into a can.

It is exactly as depressing as you expect it to be.

There are nine layers to the canned meal, taking you through an entire Christmas meal for people dining alone and seemingly unaware of Chinese takeaways.

Those layers, in order, are scrambled egg, two minces pies, turkey and potatoes, gravy, bread sauce, cranberry sauce, brussel sprouts with stuffing, roast carrots and parsnips, and a finale of a Christmas pudding.

And if you thought this was bad, wait till you see the next one on the list, which makes this war crime look like a misdemeanour.

Whole chicken in a can

Do not adjust your screens. Your eyes are working fine. You did read that right.

For many meat eaters unconcerned with the sanctity of animals’ lives, this may be your turning point. You’ve been warned.

You guys ever had Canned Whole Chicken? Yum🤤 pic.twitter.com/1Z86sybzdB

It’s probably a good solution if you’re into shredded chicken salads or something like that, but we here at Euronews can’t pretend to endorse this kind of sacrilegious behaviour.

Returning from the world of food to the definitely-the-future-of-fashion-and-not-just-a-fad world, we have the remarkable invention of the spray-on condom.

Invented in 2006 by Jan Vinzenz Krause of the Institute for Condom Consultancy, the idea was inspired by drive-through car washes, replacing the soapy liquid with a fast-drying liquid latex.

If you thought Hadid’s latest catwalk look was a snug fit, this would take it to the next level. Designers thought the idea was a smart way to ensure people wear properly fitting condoms, which would be helpful for those with “unusually sized or oddly shaped penises.”

Sure, the idea came from a good place, but the technology hit a standstill with a few crucial issues. Firstly, most men weren’t comfortable putting their pensises in the loud spray-on applicator. And secondly, the latex took up to three minutes to dry, which is probably enough time to read your expectant partner this article before you get to it.

Although it seems the dream of a spray-on condom is yet to be achieved, Durex India teased the idea in an April Fool’s video last year.