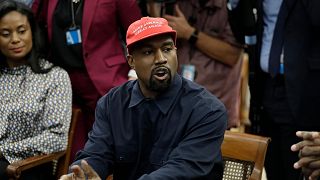 After weeks of pressure, adidas have finally announced that they've ended their partnership with the rapper formerly known as Kanye "Ye" West.

Reports are now coming through that Ye has also been kicked out of a Sketchers corporate office, lawsuits are piling in, and his net worth is plummeting.

So, has Ye finally reached his lowest point?

There’s an often referenced rule in journalism called Betteridge's law of headlines. It states that any question asked in the headline of a piece can be answered by the word “no”. But while the rapper has seemed to be on an endless downfall over the past few years, it does feel as if he is close to his nadir.

For those who haven’t followed the star’s fall from grace, it’s been a startling trajectory.

From his days as rap royalty around 2010 when he released ‘My Beautiful Dark Twisted Fantasy’, Ye has always courted controversy. Back then, it was mainly through interrupting Taylor Swift’s acceptance speech at the 2009 MTV Music Video Awards.

Things have taken a much darker turn since then.

A timeline of trouble

Not long after that, Ye gave an infamous TMZ interview where he blamed Black people for slavery in the US, saying: “400 years? That sounds like a choice”. In the same interview, he allegedly said that he “loved Hitler and the Nazis”.

By 2020, the rapper wasn’t supporting the controversial president, he was running for office in his own right.

Ye used the platform he created for his presidential run to make public comments about then-wife Kim Kardashian and his consideration of abortion, as well as suggesting her family had tried to “lock me up”.

Kardashian and Ye divorced not long after this. Since then, Ye has made his feelings known about Kardashian dating comedian Pete Davidson by making death threats against Davidson on Instagram. He even created a music video for his song ‘Eazy’ that had him kidnapping and decapitating a claymation version of the comedian.

The rapper’s feelings about Kardashian and her treatment of their children has also been frequently aired in public through his social media channels.

If all this wasn’t enough, things came to a head in the last few months with increasingly bizarre behaviour.

Then, the antisemitism started flooding in.

Ye was locked out of his Instagram after suggesting the rapper Diddy is controlled by Jews.

Then, after gaining access to his Twitter account for the first time in two years, he wrote: “I’m a bit sleepy tonight but when I wake up I’m going death con 3 On JEWISH PEOPLE The funny thing is I actually can’t be Anti Semitic because black people are actually Jew also You guys have toyed with me and tried to black ball anyone whoever opposes your agenda.”

He’s even claimed to doubt whether George Floyd was actually murdered by police, which Floyd’s family is suing him for.

After he was suspended from Twitter and Facebook, Ye even offered to buy conservative social network Parler. This acquisition of the right-wing-wooing Parler would give West control of a social media platform and a new outlet for his opinions with no gatekeeper. But at this point, who in their right minds would listen?

What has Ye lost?

In response to the rolling controversies that the rapper creates, many of his affiliations have distanced themselves from him.

Balenciaga, Gap and JPMorganChase have all ended their partnerships and business relationsips with Ye, having previously enjoyed lucrative tie-ins.

In response to his antisemitic remarks, his ex-wife made a post condemning his actions.

“Hate speech is never OK or excusable. I stand together with the Jewish community and call on the terrible violence and hateful rhetoric towards them to come to an immediate end,” she wrote on Twitter.

Increased calls have come from Jewish groups and political leaders for more action to be taken against Ye.

Those actions have come to a head today.

Ye's talent agency, CAA , has dropped him from their roster.

A completed documentary around the rapper has also been dropped entirely. MRC studio executives Modi Wiczyk, Asif Satchu and Scott Tenley announced in a memo Monday: “We cannot support any content that amplifies his platform.”

And finally, after many days of people questioning why adidas has remained associated with Ye, the sportswear brand has just announced they are cutting ties with him.

“Adidas does not tolerate antisemitism and any other sort of hate speech," the company said in a statement. “Ye’s recent comments and actions have been unacceptable, hateful and dangerous, and they violate the company’s values of diversity and inclusion, mutual respect and fairness."

The World Jewish Congress reacted to the news by saying:

“We welcome this important, albeit delayed move by Adidas, which will prevent Mr. West from using the company's immense platform to amplify his hateful ideology about Jews. It appears as though massive public outcry heavily influenced Adidas’ decision to take action against antisemitism. (…) Protecting human dignity is non-negotiable, and it is our shared duty to ensure that we learn from the past lessons. We are hopeful that moving forward, Adidas will not tolerate hate at any time, in any form.”

The news from Adidas has had a drastic impact on Ye's reported wealth. The value of the partnership has been estimated at $1.5 billion. With that gone, Ye's worth has been reduced to a paltry $400 million, reports Forbes.

Adding to his financial woes, alongside the suit he's facing from George Floyd's family, he's now being sued for never paying for gallery space he used in January.

And to top it all off, last night, Ye turned up unannounced at the Sketchers corporate office in Los Angeles. It wasn't treated as a friendly pop-in though, and he was quickly escorted off the premises. Sketchers said it "has no intention of working with West".

That being said, the first version of this article didn't feature him being kicked out of Sketchers and referred to Ye as a billionaire.

The star’s wealth is still in the hundreds of millions of dollars, so he likely won’t be going without food. But this does genuinely feel like it's the beginning of the end of the musician’s public career.

While it is true that Ye has openly suffered from mental health problems throughout his life, the scale of his platform has made the consistent newscycle of controversies too much of a burden for his promoters and many of his fans to bear.

Whether or not the endless rounds of problematic behaviour are a result of his psychiatric state, it has become largely irrelevant to his once-broad portfolio of brand endorsements and to those who don't see mental health as an excuse to spout out hate speech.

If he does need help, hopefully he will seek it. For now at least, Ye's time in the spotlight seems to be over.