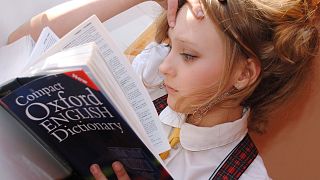 What words have defined the past 12 months?

Last year's choices for 'Word of the Year' (WOTY) were all about the post-Covid-19 world, with 'vaccine' named Merriam-Webster's word of the year, and 'vax' being the Oxford English Dictionary's choice. Collins tried to lighten the tone with pop culture words like 'NFT', but overall, 2022 has struck a darker tone.

This year's choices have been dominated by grim world events.

'Kyiv' the capital of Ukraine, made Collins' list after Russia’s invasion, as did ‘Partygate’ - following the scandals which brought down British Prime Minister Boris Johnson - and 'quiet quitting', the practice of doing no more work than one is contractually obliged to do.

Meanwhile 'sentient,' 'omicron,' 'oligarch,' and 'queen consort,' made the top lookups of 2022 for Merriam-Webster.

The WOTY is a word or expression which surges in searches and usage throughout the year. For the Oxford and Cambridge dictionaries, it’s based on public opinion, their votes and searches. Merriam-Webster publishes an annual ten-word list determined by an online poll.

Not to be confused with the Greek author of the epic poems the Iliad and the Odyssey, the Cambridge Dictionary defines 'homer' as “an informal American English word for a home run in baseball”.

The word spiked during the first week of May 2022 when it became the answer in the online word puzzle Wordle. Players who were not familiar with the word were left "feeling confused and frustrated" and took to the Cambridge Dictionary to understand its meaning.

Collins describes 'permacrisis' as “an extended period of instability and insecurity" related to the multiple crises the UK and the world has faced in 2022. This list includes climate change, inflation, multiple political debacles in Westminster, and the war in Ukraine.

According to Dictionary.com 'woman' is a word that's inseparable from the story of 2022, reflecting "how the intersection of gender, identity, and language dominates the current cultural conversation".

'Woman' is defined by the website as "an adult female person" but Dictionary.com said it "is not the last word on what defines a woman".

Despite it being such a common word, searches surged by 1,400 per cent during Senate confirmation hearings for Ketanji Brown Jackson who became the first Black woman to be confirmed as a US Supreme Court justice.

When a Republican senator asked her for a definition of the word 'woman,' Judge Jackson replied: "I'm not a biologist."

In May, a leak revealed the Supreme Court’s decision to overturn Roe v. Wade, and lookups for woman surged again.

'Gaslighting' emerged in the mid-20th century and referred to a kind of deception, as portrayed in the 1938 play involving a man attempting to make his wife believe that she is going insane. He insists her complaints over the constant dimming of their London townhouse’s gaslights is a figment of her troubled mind when it was not.

Merriam-Webster first defined gaslighting as the psychological manipulation of a person, usually over an extended period of time, that “causes the victim to question the validity of their own thoughts, perception of reality, or memories and typically leads to confusion, loss of confidence and self-esteem, uncertainty of one’s emotional or mental stability, and a dependency on the perpetrator”.

Now it has a simpler and broader meaning and is understood as “the act or practice of grossly misleading someone, especially for a personal advantage”.

2022 saw a 1740 per cent increase in lookups for the term gaslighting, with high interest throughout the year.

The dictionary puts this increase down to "the vast increase in channels and technologies used to mislead".

‘Goblin mode’ is a slang term referring to "a type of behaviour which is unapologetically self-indulgent, lazy, slovenly, or greedy, typically in a way that rejects social norms or expectations."

According to Oxford, 'goblin mode' encapsulates the current “mood of individuals who rejected the idea of returning to ‘normal life’, [following Covid-19 restrictions], or rebelled against the increasingly unattainable aesthetic standards and unsustainable lifestyles exhibited on social media.”

The word first appeared on Twitter in 2009 and went viral on social media in February 2022.

More than 300,000 people cast their vote for the dictionary's first-ever public vote on the word of the year. The phrase won by a landslide 93 per cent against two other contenders—“metaverse” and “#IStandWith”.

The Chinese character, known in Japan as "kanji", for 'war' was selected by public vote in the country as the single best kanji to symbolise 2022, a year marked by conflict in Ukraine and the assassination of former prime minister Shinzo Abe.