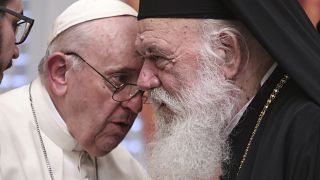 The Pope has ordered the return of three pieces of the Parthenon to Greece.

The Vatican Museums have had the sculptures for over 200 years, but a campaign by the Greek government to have the pieces of its sovereign building returned has worked.

Pope Francis has termed the return a “donation” to His Beatitude Ieronymos II, the Orthodox Christian archbishop of Athens and all Greece, and that it was “a concrete sign of his sincere desire to follow in the ecumenical path of truth.”

The Vatican Museums have had the three 2,500-year-old sculptures since 1816 as the museum’s centrepiece. The sculptures ran around the outer walls of the Parthenon Temple on Acropolis in Athens.

Many of the friezes were destroyed in a 17th century bombardement and around half the remaining works were removed in the 19th century by British diplomat Lord Elgin.

The marbles were then passed on around many museums of Europe. The largest amount went to the British Museum, where they were nicknamed the ‘Elgin Marbles’.

With Pope Francis’s decision to return the Vatican’s Marbles, pressure has increased on Britain to return their share of the Parthenon’s treasures.

A Sicilian museum recently also gave back the Marbles they had “on loan”.

Despite supposed “secret talks” held between Greece's Prime Minister Kyriakos Mitsotakis and the Chairman of the British Museum, George Osbourne, and reports the museum is willing to consider loaning the sculptures, little actual movement has happened to return the Parthenon Marbles.

The British government recently ruled out a change to the law to put the decision to return the objects in national collections in the government’s hands.

Prime Minister Rishi Sunak’s spokesperson said: “We have no plans to change the law, which prevents removing objects from the British Museum’s collection apart from in certain circumstances.”

“Our position on this hasn’t changed. Decisions relating to the care and management of the collections are a matter for the museum and its trustees. The Parthenon sculptures are legally owned by the trustees and operationally independent of the government.”

Considering the importance of returning the Marbles, Evangelos Kyriakidis, director of The Heritage Management Organisation told Euronews: “It’s sovereignty. Having a Greek national symbol in a museum called the British Museum is totally wrong. It’s like if the Crown Jewels were in Greece.”

This week’s decision by the Vatican helps Greek efforts for the return of the Parthenon Sculptures from the British Museum “and their reunification with those on display in the Acropolis Museum,” a ministry statement said. The Acropolis Museum, for its part, also welcomed Francis' gesture.

The Vatican statement suggested the Holy See wanted to make clear that its donation was not a bilateral state-to-state return, but rather a religiously inspired donation from a pope to a primate.

The intent may be to avoid a precedent that could affect other priceless holdings in the Vatican Museums, amid broader demands from Indigenous groups and colonised countries for Western museums to return looted artefacts, artworks and material culture obtained under questionable circumstances during colonial times.

In the case of the Vatican Museums, Indigenous groups from Canada have made clear they want the Holy See to return artefacts sent by Catholic missionaries to the Vatican for a 1925 exhibition and are now part of its ethnographic collection.

Is Britain finally ready to share the Parthenon Marbles with Greece?