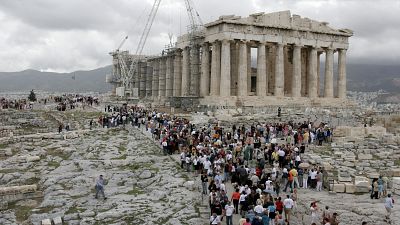 What should museums do with antiquities taken during colonial periods? It’s the question at the heart of discussions between the Greek and British government.

The chief items being debated are the Parthenon Marbles, also known as the Elgin Marbles, that have been kept in the British Museum in London for over 200 years.

The Parthenon marbles are a collection of sculptures built between 447 and 438 BCE that used to adorn the Acropolis of Athens. Between 1801 and 1812, the 7th Earl of Elgin authorised the removal of the sculptures and their transport to Britain. At the time, he claimed he had been legally allowed to do so by the ruling Ottoman Empire.

Greece has tried to have the marbles returned since 1983 and Greek Prime Minister Kyriakos Mitsotakis has made it a central part of his recent meetings with UK Prime Minister Boris Johnson.

In the most recent meeting, the British Museum’s deputy director, Dr Jonathan Williams, argued that “much of the frieze was in fact removed from the rubble around the Parthenon,” and not sawed off from the building.

Greece’s culture minister, Lina Mendoni, however accused Elgin of theft. “Lord Elgin used illicit and inequitable means to seize and export the Parthenon sculptures, without real legal permission to do so, in a blatant act of serial theft.”

Moral arguments, not legal ones

Evangelos Kyriakidis, director of The Heritage Management Organisation and previously senior lecturer in Aegean Prehistory at the University of Kent believes the museum needs to see past the legal arguments though.

The reason the Parthenon Marbles are such a sticking point for Greece, Kyriakidis argues, is that it’s not just an important monument, it’s a national symbol.

“It’s sovereignty. Having a Greek national symbol in a museum called the British Museum is totally wrong. It’s like if the Crown Jewels were in Greece,” he says.

The withholding of a key national symbol is elemental to why the British Museum is an anachronistic institution, in Kyriakidis’ mind. “The British Museum portrays itself as a global museum, but that gives the complete wrong message to the world. Why would you call it a British museum where you learn mainly about Persia or Greece, but there is barely any room for British antiquities in it. It’s a remnant of a colonial era.”

There are three main concerns that are often expressed by people when defending the right of the British Museum to keep other cultures' antiquities such as the Parthenon Marbles. 1) The native countries aren’t capable of housing the artefacts, 2) if they start giving some things back, they’ll have to give everything back and be left with nothing, and 3) the British Museum is a great place for people to come to for free to learn about world history.

Kyriakidis believes that there is a good argument against each of these points. “It’s true that Iraq does not have a good museum yet to hold their antiquities. It may do in the future, but it doesn’t at the moment. But Greece does. Greece has a purpose-built museum.”

“The British Museum actually includes the sculptural elements of another World Heritage site from Greece. The Temple of Apollo Epikourios at Bassai is the first temple by the same architect as the Parthenon and is in the British Museum,” Kyriakidis says.

A future for the British Museum

Kyriakidis says the British Museum’s third fear, that they would lose their free hub of education in London, is also solved by looking at a possible solution.

What if, instead of the British Museum hoarding antiquities from its colonial past, instead it established open relationships with other countries, opening up the possibility for fascinating temporary exhibitions.

The room that the Parthenon marbles are held in was one the British Museum was initially built around. “How about we use that as an exhibition space for temporary displays of antiquities Greece can send Britain?” Kyriakidis suggests. “Then the British Museum could show even more of Greek culture without keeping antiquities hostage.

The possibilities for exchange then become almost unlimited, with the museum able to regularly change what it shows off by collaborating with other governments. It’s also a potential money maker as shown by the way the Victoria and Albert Museum generates funds by circulating over 30 exhibitions worldwide.

For Kyriakidis, this is both an educational and diplomatic opportunity. For British children who may visit the museum a handful of times in their childhoods, now there would be reason to attend multiple times a year.

“It could also be exploited for public diplomacy as a fantastic gesture to the Greek people,” Kyriakidis suggests, noting that the majority of Brits are also in favour of returning the marbles.

Historically, the British government has wiped its hands of the issue, claiming it is up to the British Museum as an independent organisation. “That annoys Greece a lot,” Kyriakidis says.

The longer the government waits, the less likely the fantastic opportunity for sharing antiquities will come about, Kyriakidis fears. “There are committees for the return of the marbles in 25 countries. The government of Australia asked Britain to return the Parthenon Marbles back to Greece. Politicians from the US have done so too.”

“This is not just about Greece and Britain,” Kyriakidis says. “It would be a huge positive gesture to the rest of the world.”