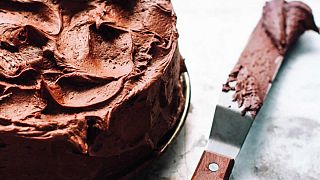 This is a day of huge cultural significance.

Not just because it’s the date when Jane Austen (1775) and Arthur C. Clarke (1917) were born, or even because today marks the release of James Cameron’s Avatar in 2009 (stay tuned for our review of the long-delayed sequel Avatar: The Way of Water, released in cinemas this week).

No... Today is National Chocolate Covered Anything Day.

Now, technically every day is chocolate covered anything day... But there's apparently a day for this (mostly celebrated in the US), so let's mark it, shall we?

On this day, you’re supposed to dunk, cover, coat, schmear, drizzle and generally indulge your favourite foods in all kinds of chocolatey goodness.

From a quick survey in the Euronews Culture section, our top foodstuffs to dip in chocolate are:

So go to town and let us know what your favourites are.

1975: British actors Sean Connery (left) and Michael Caine, (right) are accompanied by Caine's wife Shakira (center) at the world premiere of their film, 'The Man Who Would Be King', at Loews Astor Plaza Theater in New York on this day in 1975. The film is based on a story by British author Rudyard Kipling.

For those of you curious about the whole Danse Macabre bit, it's an artistic genre of allegory of the Late Middle Ages on the universality of death and a memento mori, reminding people of the fragility of life and how vain the glories of earthly life are. According to legend, Death appears at midnight every year on Halloween and calls forth the dead from their graves to dance for him while he plays his fiddle.