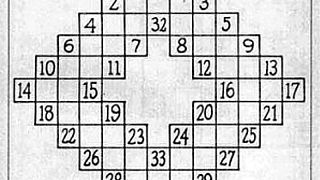 On this day in 1913, the New York World newspaper published something no one had seen before: the first Crossword Puzzle.

Though crosswords had been invented earlier in the 19th century, it was not until English journalist Arthur Wynne published this crossword that this time-killer became popular worldwide

Wynne fashioned a diamond-shaped puzzle of empty boxes with 31 clues for the words to be filled in.

That same year, The New York Times described the pastime as “a sinful waste in the utterly futile finding of words the letters of which will fit into a prearranged pattern, more or less complex. This is not a game at all, and it hardly can be called a sport…”

Ironically, The New York Times crossword is now one of the most played crosswords in the world, ever since the newspaper printed them in its pages in 1942.

Only imbeciles never change their mind, and all that…

The film premiered to a record-breaking audience at the Carthay Circle Theatre in Los Angeles. Theatre manager Ray Ducerne stated it was a sold-out opening night. Advance demand for tickets was so strong that sales were limited to four per person. More than 30,000 fans who couldn’t get one of the $5 tickets (see above) gathered outside the theatre just to be a part of the historic event.

Can you feel the love tonight

The couple registered their civil partnership at Windsor Guildhall government services and municipal offices in London. They had one of the first same-sex services in the country. Exactly nine years later, they would marry, following the legalization of same-sex marriage in the UK.

"Having our civil partnership was an incredible breakthrough for people that have campaigned for a long time - through the '60s and the '50s in England when it was so hard to be gay and hard to be open about it. And it was a criminal act,” Sir Elton John noted to the BBC at the time of legalization. "So, for this legislation to come through is joyous, and we should celebrate it. We shouldn't just say, 'Oh, well, we have a civil partnership. We're not going to bother to get married.' We will get married."