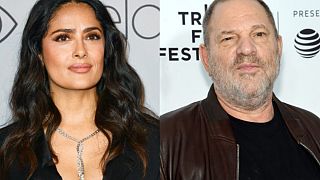 Hayek’s damning accusations were made public in a New York Times opinion piece on 13 December 2017, titled: "Harvey Weinstein Is My Monster Too."

In a devastating first-person account, Hayek described how he sexually harassed her during filming of Frida, pressured her into doing a gratuitous sex scene, and threatened to kill her. He was, in her words, a “monster.”

The allegations came after dozens of women had come forward against the Hollywood producer, leading to the fall of Weinstein and the rise of the #MeToo movement, which celebrates its fifth year this year.

In 2020, Weinstein was found guilty of rape and criminal sexual acts and was sentenced to 23 years in prison.

Till death do us part

1973: Actors Mireille Darc and Alain Delon were one of France's most famous, beautiful and glamourous couples. Here they are attending the premiere of the show Grand Jeu at the Lido in Paris on this day in 1973. Nothing unusual for such celebrities. We simply just love the picture.

1989 : American singer-songwriter and national treasure Taylor Swift was born today in Reading, Pennsylvania. She grew up on her family’s Christmas tree farm.

Talk about cool places to grow up… Must have smelled amazing.