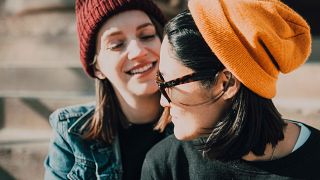 It comes as the Swiss parliament prepares a debate over how to handle the practice which sees gay, lesbian, bisexual and trans individuals given ‘therapy’ to make them straight.

Conversion therapy is a controversial practice which is sometimes rooted in religious communities.

It is a broad term for anything from talking therapies to in the more extreme examples like electroshock treatment or exorcism.

Despite broad cross-party agreement in the Swiss parliament that conversion therapy is bad, there is no consensus on how it should be dealt with.

“Some politicians think we don’t have to do anything, we already have enough laws, and we could prevent it with that,” says Roman Heggli, the managing director of the Pink Cross, a Swiss organisation fighting for LGBT equality.

“We tell them it's not enough and we can see that because conversion therapy is still happening in Switzerland, and we have a lot of victims.”

One difficulty is that the term ‘conversion therapy’ is not widely used by those practicing it. In Switzerland there are no religious groups using the term despite many groups - particularly evangelical Christians - providing it.

“What we hear from the victims is they usually come out of these therapies…with mental problems.

“We know that a lot of the victims have these problems for a long, long time and some of them have committed suicide because they can’t live with it anymore. It is a huge problem.”

Which other European countries have banned conversion therapy?

The fears of LGBT+ rights groups are that due to bans in other European countries Switzerland will become a destination for those wishing to practice conversion therapy.

Conversion therapy is prohibited in countries like Greece and Malta while Spain and Belgium are considering bans. In the UK initial concerns over ‘religious freedom’ and later the addition of trans conversion to the bill is holding legislation back.

Neighbouring countries France and Germany have also banned conversion therapy, leading to anxieties that practitioners will move to Switzerland due to the ease of linguistic links. French news agency AFP reports that, following the German ban, conversion therapy provider Bruderschaft des Weges (Brotherhood of the Way) association moved to Zurich.

“Switzerland has to acknowledge this problem and fight back.

“Public opinion is clear in Switzerland that we have to band this conversion therapy and it is a really bad thing. I think we would win a public vote if there has to be one.”

How to prove a secret life? LGBTQ+ refugees' plight highlighted