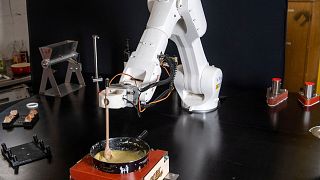 Bouébot is no ordinary robot - it's the first robot in the world capable of making a perfect Swiss fondue.

At the headquarters of Workshop 4.0, its creators are busy making the final adjustments before their machine leaves for one of the most important agricultural fairs in the world, the Paris International Agricultural Show, which begins on Saturday.

In the workshop, which is located in Sierre at the foot of the famous ski resort of Crans Montana in the canton of Valais, the waiters hum and the air is heavy with the aroma of melted cheese.

A robot that's grate at its job

Bouébot - which derives its name from the bouébos, young men who from the age of 14, help the Alpine herdsmen with tasks such as making cheeses - starts up.

The robot arm, set amongst six axes, pours the right amount of white wine into the fondue pot, the traditional container, and places it under the cheese grater.

The iconic dish, which became known and loved around the world during the Universal Exhibition in New York in 1939-40, remains at the heart of Swiss conviviality.

"We wanted to do a project a second time that combined innovation and Swiss tradition and then the fondue was all found," explains Nicolas Fontaine, 36 and co-director of Workshop 4.0.

"For the Swiss, fondue is emblematic. It's something very emotional too because it's part of our identity, our know-how," adds the young entrepreneur.

How is a Swiss fondue made?

For a human, preparing a fondue and tasting it does not present any particular difficulty apart from finding the right ingredients. It's quite different for a robot.

A classic fondue mix is called half and half and involves half Vacherin, a soft cheese and Gruyère, a hard cheese.

For Ludovic Aymon, technical manager, the biggest challenge is to manage to 'teach' a precision robot to manage the imperfections of an organic product: the different consistency, the varying thickness and the roughness.

"It's a living material (...) I can't just base myself on a 3D simulation as we can do with a lot of industrial processes. I have to have real tests to validate my processes", explains Aymon.

Bouébot continues valiantly. He cuts the crust, puts the fondue pot under the scraper before grating the cheese. He then stirs vigorously and the mixture gradually melts and mixes.

The robot does not forget to wipe the excess cheese on the spoon on the rim of the pot before adding a little pepper.

Once the desired consistency has been reached, Bouébot sticks a fondue skewer in a piece of bread, plunges it into the fondue pot, makes a pirouette and it's ready to eat.

The technological future of food production

Bouébot, the demonstration robot, can excite the possibilities opened up by the machine or cause concern.

"The effect that I find most interesting is the fear effect", that of being replaced by something more powerful, more precise, says Ludovic Aymon, who "does it for the show".

"For me, robotics, in general, should not be at the expense of humans. It should help humans," he adds.