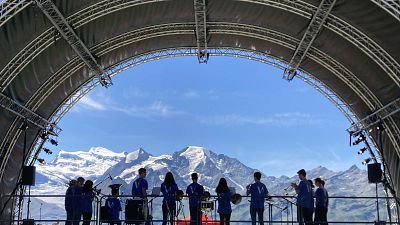 For almost 30 years now the Verbier Festival has been bringing the hills alive with the sound of music.

Held in the glorious Swiss Alps, this stunning setting plays host to the very best in the world of classical music and its rising young talent.

Founder and Director of the Verbier Festival, Martin Engström, told Euronews: "We have about 300 young musicians between 15 and 30 years old working here in Verbier. They all come from different countries, and also from Russia, and also from Ukraine, and we are not blind to what is happening around us - so we live with the reality, and we have to be part of it."

The festival opened with a so-called symphonic “Concert for Peace”. Featuring music by both Russian and Ukrainian composers, the performance was conducted by Italian maestro Gianandrea Noseda and starred Ukrainian pianist Anna Fedorova.

"This year, being invited to perform at the opening of the festival really meant a lot," said Fedorova.

Ascending to the heavens, one of the things that makes Verbier so special is that it offers concerts at high altitude.

At over 2000 metres the brass section of the festival’s junior orchestra really did hit the high notes, something that clearly resonated with their audience. Further down the hillside, visitors can sit in on masterclasses held for the festival’s prestigious academy. These are designed to spot the most promising young musicians from around the world for Verbier’s Soloists and Ensembles Programme.

Back in Verbier village itself, the streets are also brought alive. This year saw an open-air concert by award-winning Ugandan band and charity, Brass for Africa. The NGO's musicians, who come from underprivileged backgrounds, are also music and life-skills teachers. Brass for Africa is part of the festival’s UNLTD series, which aims to shine a spotlight on emerging musical talent.

The band's tuba player Nabakooza Sumayya told Euronews: "We are very happy because we have noticed that despite the difference in music, because many people here play classical music, we came here with our African style and they really like it. And that gives us more and more hope because if our students see some of our videos, they will be inspired because they come from the same background as us, the teachers who teach them. It's a great inspiration. It gives them hope for the future and that's all we want because we know that music can create a better future."

While the Verbier Festival is classical at heart, the trend to embrace other musical genres looks set to continue. The festival runs until Sunday, July 31st.