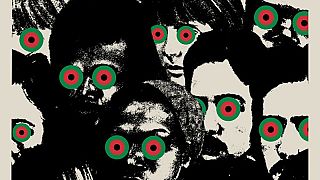 It's the second day of our Cultural Advent Calendar, in which we count down our highlights of 2022 day-by-day all the way to Christmas and beyond. The first seven days are our musical favourites of the year. We've had Beyoncé - today: Danger Mouse and Black Thought.

No record this year has come close to being on constant rotation for me like ‘Cheat Codes’ by Danger Mouse and Black Thought.

Ever since its release in August, this new collaborative album by game-changing producer Danger Mouse (DANGERDOOM’s 'The Mouse and the Mask', Gorillaz’ 'Demon Days') and Tariq Trotter aka: Black Thought of The Roots fame, has been my favourite listen of the year.

Their album has been in the pipeline since 2006 and hyped up to the rafters ever since. Especially since several artists kept adding themselves to the project, like Run The Jewels, Raekwon and Michael Kiwanuka.

As a result, there was every reason to fear that as good as it could be, 'Cheat Codes' might also buckle under the weight of expectation.

Fortunately, under the stewardship of two tenured artists, the resulting album ended up as 38 masterful minutes that blend raw urgency with melancholy and old-school hip-hop. Soul, funk and clean samples intricately layered on groovy beats all seamlessly blend together and beautifully complement Black Thoughts’ incisive lyrical dexterity throughout.

It sounds like a blast from the past and simultaneously like nothing being made right now. And that might be the definition of a timeless album.

Yes, some may argue that the lush nostalgic sounds mean that both Danger Mouse and Black Thought remain in their comfort zones and never push the boat out to fully surprise the listener. Granted, but when the standard is this high and you can hear to what extent both artists bring out the best in one another, this modern-vintage hybrid is quite simply one of 2022’s best albums.

There are so many high points that it’s hard to pick a favourite track. There’s absolutely no filler.

There’s the boom-bap swagger of ‘No Gold Teeth’, the percussion-heavy ‘Strangers’ featuring A$AP Rocky and Run The Jewels, the wistful ‘Aquamarine’ featuring the always-welcome Michael Kiwanuka and his soulful vocals…

One stand-out is undeniably ‘Belize’, which features mournful horns and the late (and dearly missed) MF DOOM and his unparalleled wordplay.

But if push comes to shove, the high watermark must be ‘The Darkest Part’, featuring Raekwon and Kid Sister.

The catchy chorus of “_Shine the light into the darkest part of me / All around you, find the one thing they can't see / Though they say / They'll take your pain / Don't give it away_” is a throwback to 80s soul, with faint echoes of George Benson’s ‘Give Me The Night’.

The beat is one of the strongest on the record, and when Black Thought raps “I'm more skeptical of followin' the metronome / I guess technically, I'm on another echelon,” you believe him.

These two are on another echelon. Feel free to step up and meet them on their level.