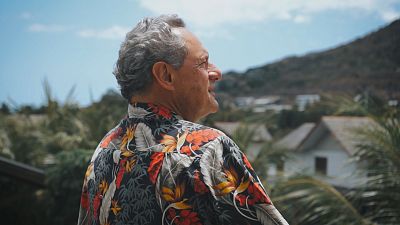 When he retired in the spring of 2021, he recalled the "beautiful vacation" he had with his wife on the island in 2019, and the two decided to move to Mauritius shortly after.

Everything is so close

The couple chose to base themselves in the Black River district on the west side of the island and have been enjoying the benefits.

"For retirement life, I think it is very pleasant here because everything is so close. You have the mountains and the seaside," Eugen says.

Aside from the facilities such as the gym and spa, Eugen and his wife have been taking advantage of several beaches located within walking distance of their penthouse.

“A very pleasant place to relax. All local families picnic at the beach and bring their music with them. Sometimes we ask, and mostly they invite us to join and dance with them. This is very special”, he told Euronews.

Eugen often found himself stressed in the later part of his career and picked up cooking as a hobby to relax. Now it has developed into a passion for him since he has more time to experiment with a wide range of ingredients within his reach on the island.

“You have a lot of speciality shops here… Italian, French, and German, and they are well distributed all over the island”, he says.

The local cuisine on the island has inspired Eugen to try new tastes and he has already integrated them into his cooking.

“I expanded my horizon with the local cuisine here. Now I produce my own Swiss-Creole kitchen”, Eugen said.

Having recently received an offer to cook at a local hotel, Eugen is now considering taking his passion a step further.

Mauritius: From honeymoon to forever home