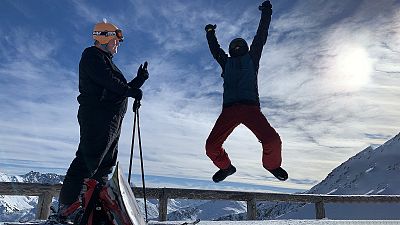 Matthias Zeitler is the co-founder of Coworking Bansko, one of the most recognised destinations for digital nomads in Europe. This German entrepreneur, a digital nomad himself, created the haven for foreigners five years ago.

He chose the small mountain town of Bansko, one of the main ski resorts in Bulgaria. "I decided that Bulgaria is actually a very interesting location because there's a low cost of living," Matthias said. "There's low taxation. It's in Europe, so you don't have any issues with visas and it has amazing nature. I found Bansko, here in the Pirin Mountain range. As I love the mountains, for me, it was a natural choice to come here.”

Today, coworking Bansko has around 100 members from all over the world. Most of them work in the digital space and include writers, translators, graphic designers and software developers. What makes this place magical, according to Matthias, is its community.

A place for people to thrive

The coworking environment provides a lot of opportunities to share skills and present business ideas, as well as offering sports and social activities. Members are able to work and at the same time meet people to go skiing and snowboarding with.

“Of course, we could all work from home, but it's quite boring. People come here to be surrounded by like-minded people who understand their needs and your vision,” Matthias said.

“It's really a mix between working and just enjoying this mountain town.”

For digital nomads, often it's a little bit difficult to make connections when they go to big cities. Coworking spaces are full of freelancers that live in the city.

Matthias is originally from Munich, Germany. He had a career in a large translation and language localisation company but when he started his own online marketing company, he realised he could be based anywhere. He then travelled and worked in many countries, including Russia and the USA.

“For digital nomads, often it's a little bit difficult to make connections when they go to big cities. Coworking spaces are full of freelancers that live in the city and these people already have their social networks and connections," Matthias explained.

"So digital nomads often choose destinations like Bansko, or Bali or Chiang Mai, where they meet lots of other digital nomads. People [to whom] they don’t have to explain they are not on a vacation, but they actually have to work while they travel.”

Matthias started the coworking business as a hobby in order to be able to work and have friends visit.

“We were about 10 friends. We rented a small place together. We wanted to play board games and have fun in the mountains. Since then, we have grown into one of the most recognised nomad destinations in Europe. We are averaging about 100 members, and, of course, this means there are also a lot of new requirements.

Matthias wants to transform coworking Bansko from being a business he owns into something that his community owns together. One of the ways he is going to make that happen is “Co-living Bansko”, which will offer accommodation to members. He also wants to grow the business by attracting companies instead of just freelancers and solopreneurs.

How to make the most of your work experience abroad

These are Bulgaria's best beaches for a 2022 summer holiday

Giving ancient varieties a new twist: meet the next generation of Bulgarian winemakers

Hollie Murphy, the coach training Dubai’s heroes for a future without limitations

Akmo, the artist who found her voice in Dubai