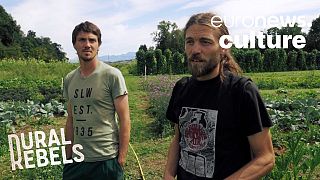 Matthias and Sam are modern-day farmers who love to experiment.

They have been working together on their agriculture project SlowGrow, in Switzerland, since 2018. Their focus is to grow healthy, tasty food while developing future-oriented cultivation methods.

They follow the principles of regenerative agriculture, which goes beyond organic farming.

The aim of regenerative agriculture is to rebuild the soil's organic matter and restore degraded soil biodiversity – this also results in carbon drawdown, reducing the carbon footprint of agriculture, and improving the natural water cycle.

It's an urgent issue because healthy soil is seriously in danger.

A shocking 90 per cent of the Earth’s valuable topsoil is likely to be at risk by 2050, according to the UN's Food and Agriculture Organization (FAO).

Regenerative agriculture and the importance of soil

Healthy soil and a diverse range of species in the environment can offer plants optimal living conditions and help produce nutrient-rich food.

But healthy soil requires topsoil, the upper layer of earth which contains 'humus'.

Humus is the term in soil science for the dark organic material which is made from decomposing plant and animal matter. It is the nutrient-rich matter that is vital for successful agriculture, and according to the FAO around 95% of the world's food is grown in just a few centimetres of this soil.

Yet around the world, healthy topsoil is currently being destroyed through intensive farming practices, erosion and chemical pollution.

Regenerative agriculture aims to not only ‘not harm’ the land but actually to enrich and regenerate the soil.

Putting it simply, “after harvesting our crops, the soil is better than before sowing!”

"Our take on regenerative agriculture is that it is multifunctional,” explains Matthias. "Which means that the soil is improving. Not only the humus (organic matter) but the structure. The structure of the roots needs to improve. At the same time, fertilisers and irrigation should not be necessary, at least not in Switzerland."

Matthias and Sam believe, contrary to popular opinion, that regenerative agriculture is doable on a big scale. Part of their SlowGrow mission is to demonstrate this by sharing their findings, knowledge and tools between farms.

Innovation on the farm

As a trained aerospace engineer, Matthias loves to experiment. They use their land as a living lab to test machines and techniques.

Matthias and Sam have realised that many current equipment and technologies used in agriculture are just not built to manage and preserve the soil’s organic material. The machines either don’t work or get clogged.

To overcome this kind of problem, they dedicate a part of their farm's resources to innovation.

“We are experimenting with machines. To do what we do by hand here, with machines. In other words, to try to spread the topsoil by using a machine and to cover the land organically. That's what our department of development does. It researches how to manage large quantities of organic material."

The young farmers say that their project is only possible because there are other people, like them, who are interested in exploring alternatives in agriculture, and there are enough clients ready to pay for high-quality, organic products.

Find out more about Matthias and Sam's project by clicking on the video above.