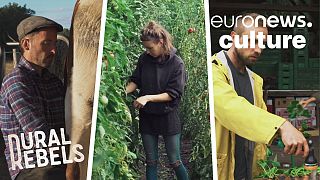 In the German district of Oderland, to the east of Berlin, lives a group of people who believe in an alternative approach to farming, and an alternative way of working.

At ‘Hofkollektiv Bienenwerder’ up to 14 people from different generations live and work on an organic farm following the concept of community-supported agriculture, a principle based on a partnership between farmers and consumers to share risk and reward. In Germany, this principle is known as ‘solidarity agriculture’.

“The solidarity agriculture principle aims for farmers and vegetable shop owners to work in cooperation with consumers," explains JoJo, who lives and works on the farm. "So if there is a bad harvest, something bound to happen more and more often due to climate change, the farmers can survive financially. Consumers usually pay a fixed monthly price all year long, for which they receive vegetables.”

The farm’s organic vegetables are delivered directly to consumers in the surrounding areas and in Berlin, as well as to collectively-run organic shops in the city. The ambition of Hofkollektiv Bienenwerder is to make organic food at an affordable price.

Hofkollektiv Bienenwerder is organised without a hierarchical structure, the motto on their website reads: "No Masters, No Servants". Every decision is made collectively in their weekly meeting.

“In the end, it's a business that we run together,” says resident and worker Marek. “It’s this division of work done more or less on a free basis but out of responsibility. The feeling of responsibility for myself and for everybody else.”

In addition to organic vegetable cultivation, the farm also keeps cows, goats, horses, chickens, ducks and bees. Importance is placed on sustainable use of the land and soil.

The young Swiss farmers rethinking soil for the future of food