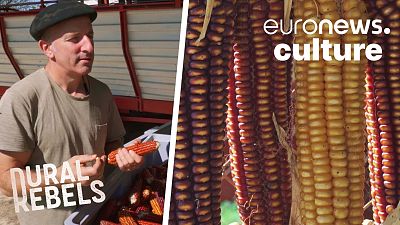 Jon Harlouchet comes from a long line of Basque farmers in the Pyrénées-Atlantiques department of France.

One day, back in the 1960s, when his father was working on the farm, a salesman arrived from a company selling corn seeds. The man was giving out free seeds and a recommended treatment to maximize yield.

“Test them,” urged the man.

It worked. The seeds grew well, all looking very much uniform. The treatment was efficient and the land was fertile, so the corn was a roaring success.

“They used the strategy any colonist would use,” says Jon.

The new, better-performing corn crop that Jon’s father began planting was a hybrid. Hybrid corn is a type of crossbred corn, developed by repeated self-pollination, which creates a genetically pure variety.

With hybrids, breeders can intentionally create varieties with specific traits; perhaps to tolerate drought or pests, or to grow faster, or bigger.

Soon Jon’s father, and all those around him, were farming hybrids.

“The clone grows very well but eventually pollination happens between clones from the same family with the same genetics,” explains Jon. “So when you plant it again the results worsen in the next generation.”

Meaning that each year farmers have to buy new seeds from the industry.

“That was the system of natural manipulation used to force farmers to buy new seeds each and every year,” Jon says.

GMOs, transgenics and a change of direction

Around 2000, Jon, who was now running the family farm, decided to move towards organic production.

To help feed his cattle he grew corn, using organic seeds from his supplier.

But in 2015 something changed. It was during the period when many people in Europe were protesting against Genetically Modified Organisms (GMOs) in agriculture.

“There was a big fight against transgenics,” Jon adds, talking about organisms that have had genes altered by introducing DNA from a different species.

“I took part in that fight and that’s when I realised that the company I was buying my seeds from was also selling and promoting transgenics.”

“I decided that it wasn’t a good idea to leave the responsibility of seeds in the hands of these companies.”

So he took matters into his own hands and began searching for and eventually growing the traditional and genetically diverse corn known as Grand Roux Basque, a maize cultivated in the Basque Country since the 16th century.

A collective approach, based on sharing

Gradually, several of Jon’s friends and fellow farmers started working with the seeds too. They set up an association, Arto Gorria, to manage the growth and distribution of their corn seeds.

“We set some rules," Jon explains. "The first one is that it has to be grown ecologically, without chemicals."

“There are also symbolic rules. We don’t let the corn seed enter into a monetisation system. You can only get it by exchanging it for something else. We don't sell it," he continues.

“We forbid irrigation. It has to be suited to the environment. If it doesn't rain, you shouldn't plant corn. Another important point is that we limit the amount of corn that is exchanged, by people or workers."

In doing so, the association aims to allow lots of people to grow a little bit of the corn, rather than for one person to grow a lot.

“I think it's possible to have a beautiful life working as a farmer,” Jon reflects. “For that, you need to find the meaning and the positive side of this job … And to do that you need to free the job from an industry that uses a ruling system under which you are just the executioner … That's a political project.”