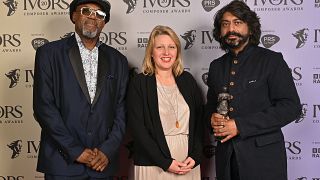 Last night, the winners of the annual Ivor Composer Awards were announced in a glitzy ceremony at the British Museum in London.

The awards, part of the Ivor Novello Awards, first presented in 1956, recognise the pinnacle achievements in classical, jazz and sound art in the UK in the past year.

Previous winners Thomas Adès, Cheryl Frances-Hoad and Rebecca Saunders all were awarded once more, with Frances-Hoad winning her third Ivor Composer Award and Saunders her fifth.

Singh, whose work in Indian-influenced music spanning classical and electronic genres has previously won the Mercury Prize for his 1998 album ‘Ok’.

Speaking at the awards, he told Euronews Culture: "It makes me recognise my own work as innovative enough, without putting the pressure on it.”

“If you're doing something new, or considerably new, people don't get it straight away,” he noted. Winning the Ivor “stirs you back into a kind of confidence level.”

Dilnot Johnson discussed her decision to create a more political work in a classical genre.

“Around about the time I started thinking about this piece, I realised that as a composer, I actually had opportunities to make political points,” she explained.

“My definition of civilization is that people look after the weak and are looked after by the strong. That's not what we always find at the moment. So I'm doing everything in my power to raise that idea that we should look after the people and if somebody's in trouble,” Dilnot Johnson said.

Other new winners included Brett Dean for his chamber ensemble ‘Madame ma bonne sœur’. Based on the letters of Mary, Queen of Scots, Dean discussed the incredible character of Mary Stuart and why she’s so relevant today.

“In this story, the aspects of secrecy and letters written in code are endlessly fascinating,” he said. “Seeing these two women who had such positions of power, nevertheless, having to deal with a man's world, it's men all around them that are dominating decision making and actions.”

Third-time winner, Cheryl Frances-Hoad, discussed the inspiration for her large ensemble piece ‘Scenes from the Wild’, based on the novel ‘Diary of a Young Naturalist’ by Dara McAnulty.

“I was commissioned by the City of London Sinfonia at Southwark Cathedral to write a piece for their 50th anniversary that either dealt with teenage mental health or dementia,” Frances-Hoad shared.

“I discovered this book by Darren Hardy who has autism. It's his relationship with nature as a wonderfully knowledgeable naturalist who finds great solace and enrichment through his relationship to nature. So it was just a really wonderful piece to write especially during lockdown,” she said.

Across the nominations this year, an incredible 46 per cent were first-time nominees, showing the breadth of talent still emerging in the classical and jazz fields.

Robin Haigh, Joanna Marsh, Emily Peasgood and Alex Paxton all shared the most nominations, each pipped for two of the nine categories.

“The Ivors Composer Awards provides an unmatched platform that recognises excellence in the classical, jazz, and sound art communities. It is encouraging to see that almost 50% of those nominated are first time nominees, highlighting the flourishing creative talent we have in the UK,” said Andrea Czapary Martin, CEO, PRS for Music.

“This is exactly why we are proud to have invested and supported the awards from the beginning and continue to pledge our support as the awards go beyond their 20th anniversary,” she added.

The importance of musical education

This 20th edition coincides with the release of a study by the Ivor Composer Awards showing the importance of a music education for the careers of classical, jazz and sound art composers.

The survey looked at the nominees and winners previous to last night’s ceremony and found that 96 per cent had learnt one or more instruments as a child.

Digging into the importance of musical education, 83 per cent of respondents had studied music to A Level, the highest school qualification in most of England, Wales and Northern Ireland.

Worryingly, there has been a decrease in students studying A Level music though. In the past decade, entries have dropped from 7,655 to 5,916 across England, Wales and Northern Ireland.

“As we celebrate 20 years of achievements by composers in the UK, this survey is a reminder that composers benefit hugely from sustained support throughout their careers,” Ivor Novello Award winning composer Charlotte Harding said.

“Alongside a healthy cultural sector, opportunities to learn, play and discover a love of music at school and in local areas can lead to a lifetime of creative expression, and should be encouraged, enhanced and protected,” she continued.

One of the biggest concerns raised by the survey was the reduction in commissions, the crucial way for composers to earn money.

44 per cent of respondents said that commissions have decreased in frequency since the start of their career and 46 per cent that per-minute commission fees had either decreased or stayed the same.

Graham Davies, Chief Executive of The Ivors Academy said: “Composers are voicing concerns about the impact of changes to funding and the long-term decline of music education in state schools. We need to bring music back into every school and community, and ensure stable, long-term funding for the UK’s enviable cultural institutions and venues.”

It’s a timely concern, as the Art Council England (ACE) has been in focus lately for the funding changes it has made to its National Portfolio of Organisations (NPO). Many of the artists present at the ceremony noted the recent NPO funding round.

In this year’s NPO funding round, ACE has focused on bringing more money into arts organisations outside of London. This has meant severe reductions in crucial funding for many popular London institutions, including the English National Opera (ENO).

The ENO has been stripped of all its funding unless it can relocate to the north of the country, potentially losing €14.7m (£12.8m) of its funding.

Nevertheless, even though a third of respondents to the Ivor Composer Awards survey said it had become harder to start a career as a composer, 75 per cent said they would still become a composer if they were starting out today.

The full winners are listed here: