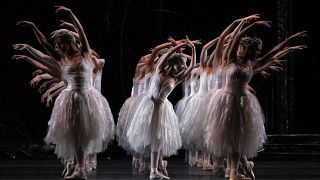 Ballerinas perform during a dress rehearsal for Anthony Dowell's production of the ballet 'Swan Lake' at the Royal Opera House in London in 2008.   -   Copyright  Matt Dunham/AP
By Anca Ulea  •  Updated: 02/11/2022

A celebration of dance across the globe and on a small screen near you: That’s the aim of this year’s World Ballet Day, which is returning for its ninth year on Wednesday.

More than 50 of the world’s top ballet companies are virtually opening their doors to audiences, through live streaming events that offer a peek into what life is like for dancers. Dance enthusiasts on every continent can sit in on classes, rehearsals, and training sessions, and even hear from some of their favourite artists.

The event was started by London’s Royal Ballet in partnership with the Australian Ballet, as a way to travel the world through dance over the course of one day.

Kevin O’Hare, Director of the Royal Ballet, told Euronews Culture that World Ballet Day has become another way to connect with global audiences.

It’s a way of engaging with our audiences in a different way. They can see all the hard work that it takes to see the ultimate performance in the end.

“It’s a way of engaging with our audiences in a different way,” O’Hare said. “We’re so lucky that people come and watch us, but actually seeing what goes into it gives the audience a greater understanding of what it’s like to be in a ballet company. They can see all the hard work that it takes to see the ultimate performance in the end.”

A former dancer himself, O’Hare says the relationship between audiences and dancers has become more intimate over the years as the Internet breaks the barrier between spectator and stage.

“It’s amazing, they really know the individual dancers,” O’Hare said. “Before it would have been very much about the company and there would be the odd break-out name that people would talk about. Now we see fans coming to see one particular dancer one night. It really is a benefit for everybody.”

O’Hare said the popularity of live-streamed events like rehearsals and classes has jumped since the Covid-19 pandemic, even as in-person attendance bounces back.

Here at Euronews Culture, we compiled a list of live-streamed events from Europe’s top companies which are now all available on replay.

The Royal Ballet’s four-hour live stream gave viewers a sneak preview of some of the season’s highly anticipated productions, including Kenneth MacMillan’s Mayerling and A Diamond Celebration, marking 60 years of the Friends of the Royal Opera House. Watch rehearsals, sit in on company class and hear from up-and-coming talent at the Royal Ballet School.

The Polish National Ballet gave an insight into their next show, Giselle. Hosted by corps dancer Remy Lamping, the broadcast featured rehearsals and interviews with dance legends like Maina Gielgud, who was invited to stage her version of Giselle in Warsaw.

The Vienna State Ballet offered a peek behind the curtain as dancers prepare for Martin Schläpfer’s Dornröschen (Sleeping Beauty), with rehearsals, backstage impressions and excerpts from the premiere.

The Dutch National Ballet live-streamed a full company class and rehearsal with coaching by ballet master Larissa Lezhnina, followed by a pas de deux from The Sleeping Beauty by Olga Smirnova and Victor Caixeta. The Amsterdam-based company is also releasing a new series of online ballet classes on YouTube, which it debuted during the Covid-19 pandemic.