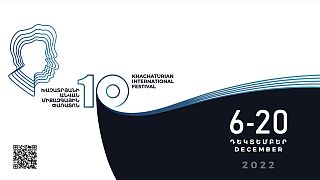 Love classical music? Then, you've come to the right place because this month we'll be bringing you exceptional performances and highlights from a series of concerts Armenia.

Euronews Culture is livestreaming this year’s Khachaturian International Festival. Established in 2013, the annual festival brings together some of the world’s greatest classical talents to the capital of Yerevan.

We'll take you into the heart of the Aram Khachaturian Concert Hall so you can feel and experience the sound and sight of the Armenian State Symphony Orchestra.

The festival is named after Aram Khachaturian, an Armenian composer who was born in Georgia and is also considered one of the most important of the Soviet era, alongside the musicians Sergei Prokofiev and Dmitri Shostakovich.

Artistic Director Sergey Smbatyan has been conducting a variety of performances highlighting cross-cultural dialogue through music, as well as a celebration of Khachaturian’s legacy.

A concert programme with works by Leonard Bernstein and Friedrich Gulda. Sergey Smbatyan will conduct with Anastasia Kobekina as cello soloist.

Classical and jazz artists honoured at the 2022 Ivor Composer Awards