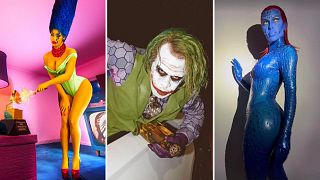 This year certainly brought its fair share of unforgettable Halloween costumes from some of the world's most famous celebrities.

From Kim Kardashian's Mystique, Sean 'Diddy' Combs' unhinged Joker, to Heidi Klum's terrifyingly bizarre worm costume, let's take a look at some of the A-listers who went all out for their 2022 Halloween looks.

After her iconic Baby Yoda Halloween costume last year, the 'About Damn Time' singer had a lot to live up to in 2022.

But it's fair to say she did not disappoint with this spectacular Marge Simpson look.

Lizzo was not the only Grammy-winner to pay homage to Marge Simpson.

'WAP' rapper Cardi B also pulled out all the stops for her costume of the beloved animated character.

But would it be a Cardi B costume without a sexy twist?

In a photo posted on her Instagram, Cardi is seen wearing a tight green corset and sky-high pumps, as she dusts off one of her Grammy awards.

In a second look, Cardi B pays homage to a series of Simpsons themed artworks created by contemporary artist aleXsandro Paloyar for Vogue in 2013.

The artworks consisted of Marge Simpson dressed in a number of revealing and iconic dresses, such as Geri Halliwell's Union Jack dress, Diana, Princess of Wales' "revenge dress" and in this case a Thierry Mugler look from 1995.

Hilariously, the SKIMS founder misjudged the dress code for her Halloween party.

"That time I showed up to a birthday dinner in full costume when it wasn’t a costume party! Happy birthday to the most beautiful kind soul Tracee Ellis Ross," she captioned a photo on social media, pictured alongside Ross wearing a smart party gown.

Twitter's new owner Elon Musk dressed up in a red Samurai-style costume, as he posted pictures alongside his mother.

The Kung-fu inspired outfit is listed online with a staggering price tag of $7,500!

Good thing he sells a lot of Teslas, shame about his taste. This outfit is giving moody teenage boy and little else.

The music mogul looked unrecognisable in his costume perfectly resembling Heath Ledger’s portrayal of The Joker from The Dark Knight.

Yes, that is really him behind the makeup.

In a number of now viral videos posted on social media, Diddy can be seen terrorising the streets of Los Angeles in full Joker character, whilst running into several other stars, including Tyler, the Creator and Michael J. Ferguson.

For this year's spooky season, Paris Hilton dressed up as her “childhood icon” Sailor Moon, the anime character created by Naoko Takeuchi.

The Simple Life star was accompanied by her husband Carter Reum, who dressed up as Tuxedo Mask, Sailor Moon's love interest.

She appeared as both the Diva Plavalaguna from The Fifth Element and the White Rabbit from 'Alice's Adventures in Wonderland'.

With a more sultry take on the beloved animated character, this outfit certainly ruffled a few feathers on social media.

Childhood ruined... or made?

Megan Fox and her boyfriend Machine Gun Kelly gave Lily James and Sebastian Stan, the stars of Hulu's Pam and Tommy series, a run for their money with their Halloween costume this year.

The couple recreated Pam and Tommy’s iconic looks for the Grand Opening Party of the Hard Rock Hotel & Casino in 1995.

They also did this...

The little Mermaid star and one half of the musical duo Chloe x Halle stunned her fans in this 'Avatar'-inspired costume.

It even received a seal of approval from the official Twitter account for James Cameron's record-breaking film franchise.

"We're happy to have you as part of our world," the tweet read.

But no white swan is complete without a black swan, and her close friend GG Magree filled the role.

Last but not least we have the costume of Heidi Klum, who has become known for her elaborate Halloween costumes and dubbed by many online as 'The Queen of Halloween'.

The 49-year old supermodel was unrecognisable as she slithered her way to her highly-anticipated Halloween party in New York, in a creepy full body worm costume, with only her eyes, nose and mouth visible.

She was accompanied by her husband, Tom Kaulitz, who dressed as a fisherman with a bloody eye.