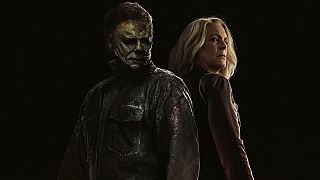 The bloody saga of Michael Myers vs Laurie Strode comes to a close in Halloween Ends … And against all odds, it’s a pleasant surprise.

For those who haven’t been keeping track - and no one would blame you, considering how aneurysm-inducing the Halloween continuity has been since 1978 - David Gordon Green’s three-part retcon / reboot of the beloved franchise is now taking its final bow.

The trilogy pitched itself as the direct continuation of John Carpenter’s original slasher classic and disregarded all other Halloween films as non-canonical. The results until now have been middling to say the least.

Green and his revolving coterie of co-writers (Danny McBride remaining the constant across the three films) have displayed a healthy appreciation for Carpenter’s source material, but they only managed to make 2018’s Halloween a serviceable rehash and last year’s Halloween Kills an absolute train crash and one of the worst instalments in the series’ 40+ year history.

Following that all-filler-no-killer mid-trilogy chapter, expectations for this year’s saga closer were at an all-time low. It’s therefore surprising that Halloween Ends, against all odds, is far more coherent and thrilling than both of its predecessors.

It opens on Halloween 2019 in Haddonfield. A teenager, Corey (franchise newcomer Ronan Campbell) is babysitting, and the prank-filled evening culminates in a freak accident which condemns him as the town pariah.

Fast forward to 2022. Laurie Strode (Jamie Lee Curtis) hasn’t seen her monster in four years. She’s brought a house, has settled for a quiet life with her granddaughter Allyson (Andi Marichak) and is dishing out colourful wisdom like “Show grief your fucking tits!”. She’s also writing her memoirs and seems to have turned a page, putting her traumatic past and the death of her daughter behind her.

She bumps into Corey at a gas station and ends up introducing him to Allyson, who takes a shine to the broken loner. However, the past comes back to taint this new chapter for the Strode family…

No more shall be revealed in this review, for fear of erring into spoiler territory. Safe to say, however, that Laurie, who was bafflingly sidelined in the previous instalment in favour of a nosebleedingly annoying bunch of vigilantes with the collective IQ of a sock, gets far more screen time this time around. Gratifyingly, Halloween Ends also dares to take this timeline’s narrative to new interesting places. It may not be as sphincter-tighteningly tense as it could have been; nor is it up there with the series’ best instalments, especially the criminally underrated Halloween H20 (1998); however, there’s something to be applauded about the way it risks alienating some of the fanbase by trying to slash away any sense of predictability.

Some of the twists are needlessly telegraphed - especially when it comes to the inclusion of a Freudian nightmare of a mother figure, which assumes that no one won’t immediately recognize the red flag that is an overbearing matriarch on a fragile mind. There’s also little-to-no doubt that for all of its ambition, the film singularly loses its nerve during the rushed final act, which unfortunately doesn’t quite deliver the showdown catharsis one would have hoped for.

But on the whole, Halloween Ends is more hit than miss, especially when it comes to the thematic content.

Unlike the promising but squandered themes in Halloween Kills about the guilt inherent to intergenerational trauma and the timely winks to collective hysteria – all of which were handled by writers barely operating above the level of a full nappy – _Halloween Ends_’ motifs are actually handled with care. The film effectively touches upon the transference of fear, the corroding nature of blame and how someone’s survivor can be another’s monster, even if they are only guilty of being the conjured figurehead of a community’s laceration.

Indeed, it may take a village to raise a child, but same applies to monsters, especially when a community subconsciously yearns for urban legends in order to deal with guilt and purge their pain.

Halloween Ends also deals with the dichotomy of evil’s nature through its narrative choices, electing to represent the main threat as both the external force that threatens the tribe (The Shape) and the evil that acts as a growing infection from within (no spoilers here). It’s not particularly subtle, granted, but lightyears away from the repeated “Evil dies tonight” mantra in Halloween Kills. And even when Halloween Ends sacrifices character arcs for silliness and spells things out far too much, there’s enough here to keep slasher fans and gorehounds entertained.

And for those wondering: yes, the title doesn’t lie.

This may be the fifth time the Halloween timeline has ended, and as much as we’re told that “evil doesn’t die, it changes shape”, Halloween Ends does provide closure. It clears the low bar set by the trilogy's middle episode, and while that may be damning it with the faintest of praise, Green’s closer to his wobbly trilogy remains a broadly effective swansong for horror's original “final girl”.

Until the next inevitable reboot - thank you, Laurie.