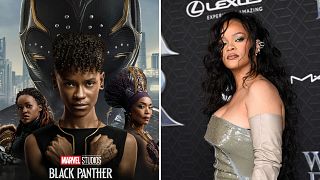 Disney and Marvel Studios' Black Panther: Wakanda Forever made its debut last night at its world premiere, in a star-studded event attended by the cast, filmmakers and a number of special guests, including Rihanna and her rapper boyfriend, A$AP Rocky.

Written and directed by Ryan Coogler, Wakanda Forever is a sequel to the filmmaker’s 2018 movie Black Panther and is the 30th feature film entry in the Marvel Cinematic Universe.

The original film smashed records at the box office, generating a total of $1.35 billion in revenue and it became the first superhero movie to receive an Oscar nomination for Best Picture.

It's fair to say there is a lot of pressure on the filmmakers of Black Panther's highly-anticipated sequel.

Wakanda Forever comes after the death of the beloved Chadwick Boseman, who played King T'Challa in the first Black Panther movie. Boseman died in November 2020 after a years-long battle with colon cancer.

"I was very relieved with what he (Ryan Cooler) did with this story. I had been dreading it," admitted Lupita Nyong'o, who plays Nakia, at the sequel's premiere.

"And then when he walked me through it, I was like, 'Oh, phew, we don't have to pretend like we are not in grief, you know? We got to use our grief and we got to just add juice to Chadwick's legacy," she said.

What to expect from Wakanda Forever

The film takes place in the wake of T'Challa's death as the Wakandans strive to protect their nation from intervening world powers.

As the film's characters grieve the death of their king, a core group of strong female characters must chart their country Wakanda's path forward.

"Now with T'Challa's passing, these women are dealing with that and figuring out the way forward by their power, their agency is something that was set in the first one. And we get to see it flourish in this one," revealed Lupita Nyong'o at the premiere.

Many of the original cast are back for the sequel, including Nyong’o, Letita Wright, Winston Duke, Martin Freeman, Angela Bassett and Florence Kasumba.

Wakanda Forever also has several new additions to its cast, including Tenoch Huerta Mejía as Namor, king of a hidden undersea nation and Dominique Thorne as Riri Williams / Ironheart.

It also boasts a new set of Latinx characters and actors, including Mabel Cadena.

"This is crazy for a Mexican woman, this Latina woman, as a brown woman, it's huge. It can be part of all of this representation and visibility," said Cadena at the world premiere.

The film is scheduled to release in cinemas on 11 November 2022.

The return of RiRi

The internet was sent into a frenzy when it was recently announced that Rihanna is making her long-awaited return to music for the lead single of Black Panther: Wakanda Forever.

Both Marvel and Rihanna shared a short video teaser on social media featuring a shimmering title card, and then a letter 'R,' using a similar typeface to the one Rihanna has used as her logo since "Rated R."

The song, titled “Lift Me Up", is a tribute to the Chadwick Boseman and was written by Rihanna in collaboration with Nigerian singer Tems, Oscar-winning composer Ludwig Göransson and director Ryan Coogler.

Listen to the full song below:

Rihanna, who attended last night's Wakanda Forever premiere (26 October), is rumoured to have recorded two tracks for the movie's soundtrack.

The release marks the first new music from Rihanna since her album "Anti", which came out in 28 January 2016.

Early reactions from the premiere

The official review embargo for Wakanda Forever lifts on 8 November, however the social media embargo lifted after the premiere.

Here's what people are saying so far about the sequel:

Check out the video above for footage of the premiere and of the upcoming film Black Panther: Wakanda Forever, out in cinemas on 11 November 2022.