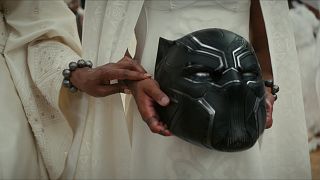 Still from the Black Panther sequel, Wakanda Forever, which will be released in French cinemas on 9 November   -   Copyright  Marvel Studios - Disney
By David Mouriquand  •  Updated: 19/10/2022

But for French audiences, it was nearly Wakanda For-never.

For the past few months, there have been doubts whether the film, which is one of this year’s biggest tentpole releases and a much-needed box-office champion for cinemas still feeling the post-pandemic hit, was going to be released in French theatres. Disney were threatening to pull the release due to France’s restrictive regulations and strict timing policies between theatrical release and streaming rollouts, or the “windowing” regime.

The Marvel blockbuster will finally be released in France on 9 November, but the House of Mouse remains at loggerheads with the country’s regulators, and this conflict could potentially signal a rupture that will mean Disney’s biggest movies may bypass cinemas altogether and go straight to streaming in 2023 - unless what Disney calls France's “anti-consumer” distribution rules are fundamentally reformed.

“As we have stated before, we believe the chronology is anti-consumer and puts all studios at increased risk for piracy, which is why the majority of the stakeholders agree that it needs to be completely revised,” a spokesperson for Disney said.

So, while Wakanda Forever was not weaponised and used as a cinematic bargaining chip to pile on pressure over current French policies, audiences risk missing out on titles like Guardians of the Galaxy Vol. 3, the fifth Indiana Jones film and The Little Mermaid, all set to be released next year.

Why are Disney fed up with France’s distribution rules?

It all starts with “l’exception culturelle”, a term meaning cultural exception, and which boils down to France’s stance that certain art, including cinema, should be protected from the free market.

This means that anyone showing movies needs to contribute to a national fund and the more you contribute to this fund, which goes towards financing more movies, the shorter the window of time you have to wait before movies can be released on streaming platforms.

France sets a strict timetable of when films released theatrically can then be shown on television or streaming platforms. The same does not apply for films that go directly to streaming.

The country sees this as a way of protecting its film industry, cinemas and national TV industries.

How does this affect Disney, you may ask?

Well, Disney are thrilled that their films are coming out in cinemas, but since the creation and launch of Disney+ in November 2019 (March 2020 for most of Europe and April 2020 in France), the company went from being a studio to also being a broadcaster.

Under the current rules governing the industry in France, a cinema release prevents Disney from making Wakanda Forever available to French Disney+ subscribers until April 2024 - and limits it to being available for only five months. By comparison, the Black Panther sequel is likely to appear on Disney+ by Christmas in most other territories.

If no partnership deal is agreed with the broadcaster, the film will then return to the Disney+ service permanently only in November 2025 - three years after it hits cinemas. This does not prevent the film from being shown during that period on French television.

A need for modernization

Earlier this year, Disney took a stance against the French “windowing” system by sending the animated action adventure Strange World straight to Disney+.

For Disney, windowing makes their streaming service less attractive; for France, Disney don’t contribute enough to the financing of French cinema, so the House of Mouse has to wait.

Disney has said that French authorities need to acknowledge that the system “needs to be modernised” and need to set “a clear timeline for those discussions”. But it added that until a solution is found, future movie releases would be decided on a “film-by-film basis.”

"We will remain actively engaged in the upcoming meetings and we will work closely with the CNC, the Ministry of Culture and the various other stakeholders in order to try and find a quick and equitable solution for all parties. In the meantime, we will continue to make future release decisions on a film-by-film basis.”

From Disney’s POV, the system feels antiquated, a throwback to an era which needed a system put in place so that French film producers and cinemas had a reserve of public and private funds in order to produce more films. But, as protective law that preserves a steady cultural output, France has thus far remained steadfast.

Shorter windows for other streamers

Two years ago, Netflix, Amazon and Apple decided, for the first time, to contribute to French cinema. This means the streamers were able to shorten their windows.

The current rules mean that any new theatrical release is required to have a four-month theatrical exclusive, before being available to purchase. At six months, they are available on the Canal+ channel and other pay TV channels. After its initial release, a film can be released on Disney+ for five months before being removed to air on free-to-air channels for a further 14 months.

Netflix made a deal with French cinema guilds last year, a deal which includes investment in French and European films over the next three years (all with a release in French cinemas) in exchange for reducing the window from 36 months to 15 months. Amazon agreed to 17 months. The chronology stays at 22 months for the free broadcasters (France 2, France 3, TF1, M6) and 36 months for the free broadcasters’ SVoD platforms.

Unlike those streaming giants, Disney refused to sign this deal, citing that the windows remained too long.

Now, the streamer is trying to get everyone back at the negotiating table and pressuring the Culture Ministry and French regulators to shorten windows for their theatrical releases.

French culture minister Rima Abdul-Malak said in September that she was in favour of “reopening the discussions” on the windowing rules, which she described as “not being cast in stone.”

The stand-off continues, or blackmail as it is seen by some French media outlets.

Disney's release debating regarding Wakanda Forever in French cinemas has inspired the presidents of France’s free-to-air networks TF1, M6 and France Televisions to write a strongly worded open letter in Le Monde last month. They called the move a threat to “the vitality of French cinema."

The open letter outlined that “the vitality of French cinema is the result of the collective ambition of French free and pay television channels and of the major players in the film industry (cinemas, producers, distributors), supported by the public authorities for more than 50 years to preserve the French cultural exception.”

For them, “The principle is simple: in return for its investment and the respect of various obligations, each operator has the right to exploit for a predefined period of time, on an exclusive basis and without competition, the film it has financed or acquired.”

The debate has French cinemas over a barrel, as they have been struggling to attract consumers back to theatres. A lack of major Hollywood productions and audience-wooing blockbusters means significantly less money for the country’s cinemas.

According to figures from the CNC (Centre National du Cinéma), ticket sales for the first nine months of 2022 (from January through the end of August) were about one-third lower than in 2019, before the coronavirus pandemic. Indeed, the CNC reported 97.6 million admissions, down 30% from the same period in 2019 and down 28.7% from the 2017-2019 average.

Only 7.4 million tickets were sold in September, the worst tally for the month since the '80s.

Cinema owners have been outspoken about the problems with the French windowing rules, as the way films are distributed has changed radically over the last few years, with shorter windows and day-and-date releases. Falling ticket sales are a direct threat to them and production companies, chiefly because France’s system of public and private financing for cinema is based on a tax on tickets, as well as contributions from broadcasters.

The next negotiations between the streaming and film industry and the French government are expected to take place in January 2023. These meetings, which many see as a conflict that pits powerful American studios against the French and European industry, may usher in a new media chronology in the beginning of 2023.

According to Hélène Etzi, president of The Walt Disney Company France, major changes will take place in February 2023. The Disney boss says that "the majority of players" in the sector want to "completely revise" the media chronology, which is "counterproductive" today.

Etzi's comments, as well as the fact that this announcement was made by the president of a private company, have shocked many in the French industry.

So, a bluff to further a streamer’s strategy plans? The advent of a new media chronology which many fear could spell the collapse of French cinema financing? Or a moment to seize in order to get with the current consumer viewing habits and update archaic releasing strategies?

What’s certain for the time being is that cinemagoing culture is in a bad place. All-too-precious cinemagoing experiences are increasingly at risk, and the French ecosystem faces major questions in the coming months, as well as the looming threat of further theatre closures.