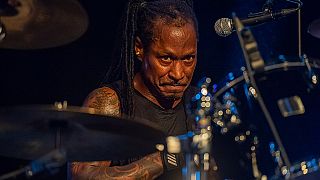 The drummer, who also played with Dead Kennedys, was found dead at his home in Los Angeles on 28 October.

Peligro, whose birth name was Darren Henley, is thought to have suffered an accident at home with police saying he died of a head injury after a suspected fall.

“Police on the scene stated that he died from trauma to the head caused by an accidental fall. Arrangements are pending and will be announced in the coming days.

“We ask that you respect the family’s privacy during this difficult time. Thank you for your thoughts and words of comfort.”

Who was D.H. Peligro?

Peligro joined the Dead Kennedys in 1981 and played with the band until they split in 1986. He began playing with the Red Hot Chili Peppers two years later.

“My dear friend, my brother, I miss you so much. I’m devastated today, a river of tears, but all my life I will treasure every second,” wrote Red Hot Chili Peppers band member Flee on Instagram.

“The first time I saw you play with the DK’s in ‘81 you blew my mind. The power, the soul, the recklessness. You became my beloved friend, so many times of every kind. We had so much fun, so much joy, having each other’s backs. I love you with all my heart.

“You are the truest rocker, and a crucial part of rhcp history. D H P in the place to be, you live forever in our hearts, you wild man, you bringer of joy, you giant hearted man. I will always honor you. Rest In Peace and freedom from all that restrained you.”

As well as drumming for the bands Peligro enjoyed a successful solo career releasing three studio albums one of which, Sum of Our Surroundings, was named rock album of the year at the American Independent Music Awards.