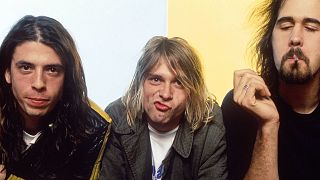 You’d have trouble finding a music star of the 80s and 90s that hasn’t been in front of Tony (AJ) Barratt’s lens.

As a kid growing up in Manchester and reading British music magazine NME (New Musical Express), Barratt quickly became influenced by and enamoured upon music photography, starting out at rival magazine, Melody Maker.

Proving he had the stuff to make it in music by photographing concerts, Barratt soon moved on to taking portraits of artists being interviewed for the magazine.

A couple of years later, he made it to the NME.

Drawing spontaneity from his subjects

From this point he became known as AJ due to a food photographer of the same name floating around the scene.

Barratt said his approach to each photoshoot differed depending on who the artist was.

If the magazine was interviewing an emerging artist, he wouldn't know much about them and didn't have access to the internet as an endless source of information.

Some shoots were planned on the spot, such as when he asked the band The Charlatans to jump in a lake for the money shot.

Other shoots, with bigger artists, might be planned weeks ahead. Some shoots were extremely short - a few minutes - others might lead to something unexpected, like playing pool with Tom Waits.

Then there was the portrait he took of Leonard Cohen - an artist he described as “playful” despite his reputation for writing introspective, sincere songs - holding his daughter by her ankles.

Days before, Barratt was playing with his daughter Lucca when he caught himself in the mirror while holding her upside down, thinking it would make a great shot.

He pitched the idea to Cohen and he was game – they managed a few snaps before Lucca started to cry.

Barratt photographed for the NME from the mid-80s to the mid-90s, the heyday of music magazines.

In 2018, the magazine ceased publishing and is available online only.

The days of being sent around the world to shoot a star may be over for many music outlets, but for over ten years, Barratt got to do “a dream job”.

Watch the interview with AJ in the media player above.

What are the most mispronounced words of 2021?