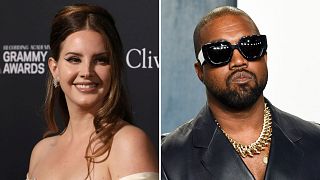 American singer-songwriter Lana Del Rey recently revealed that a laptop containing songs from her upcoming album was stolen from her car a few months ago in a smash and grab robbery.

The 37-year old Summertime Sadness singer opened up about the incident in a series of videos on her private Instagram page, explaining that a laptop, three cameras and multiple hard drives were all taken from her car, parked on Melrose Place in Los Angeles.

She said she was forced to remotely wipe her computer, thus deleting a 200-page manuscript of her forthcoming poetry book with major publishing company Simon & Schuster.

"Please don't listen to the music if you hear it because it's not coming out yet," she urged her fans.

Sad to say that Lana Del Rey is not the only musician who has had their hard work taken from them due to unforeseen circumstances.

From robberies to ransoms, to unfortunate toilet flushings - let's take a look at some other artists who have had their music lost in time.

Skrillex - Have back up

"I had 2 laptops and both of my hard drives stolen out of my hotel in Milan Italy last month. On those laptops and drives were all the project files of Skrillex. All gone now," shared the artist on various social media platforms in 2011.

"Also I had a new album that is now gone too. I spent a week pulling my hair out but now I'm just focusing on the future and re-making my album," he said.

The moral of the story for any aspiring musicians and producers? Always back up your work!

Ever wondered why Kanye "Ye" West wrote such cringeworthy lyrics, such as "Now if I fuck this model / And she just bleached her asshole / And I get bleach on my T-shirt / I'mma feel like an asshole", on his album The Life of Pablo?

Well this next story may provide the answer.

The rapper and Yeezy creator was forced to rewrite the lyrics for his 2016 album, after his daughter North flushed his phone down the toilet.

The incident was explained in an episode of Khloé Kardashian’s talk show, Kocktails with Khloé.

“Kanye had every single rap in his iPhone before he started really working on ‘Pablo’ and then North flushed it down the toilet and they could not be retrieved,” Kim Kardashian explains.

Many of you will be familiar with Jimi Hendrix's widely acclaimed second album Axis: Bold as Love - but you may not know that its original A-side master was left in the backseat of a London taxi - by none other than the Voodoo Child himself.

Fortunately, the tape only contained one side of the album, but it was never retrieved and lost forever.

In a rush to fulfil their contract with Track Records, Hendrix's producer Chas Chandler and engineer Eddie Kramer had no other option but to quickly re-mix the original recordings.

They ran into complications however when they could not match the lost mix's fourth track If 6 Was 9 - but luckily bassist Noel Redding had his own copy.

Redding's copy was reportedly extremely wrinkled, and had to be ironed out in order for it function.

(See video above to learn more about how this track was mixed.)

"All I want to know is why Egon stole MF DOOM rhyme book and refuses to give it back to DOOM family, even after DOOM passed away," said Kweli in an Instagram post.

DOOM's widow Jasmine Dumile has since confirmed the claims that Egon has illegal possession of his rhyme books and has refused to return them.

"We had hoped after DOOM transitioned Egon would do the right thing and return the books to the family but he has continued to ignore these requests," she revealed in a statement to Complex.

Egon may have stolen the rhymes, but he'll never figure out DOOM's cadence, flows and witty delivery...

Did you know that the original demo CD for Tom Waits' fourteenth studio album Alice (2002), originally created for an avant-garde opera of the same name by theatre director Robert Wilson, was once stolen?

In 1999, years before the album's official release, a bootleg surfaced called "Alice, the Original Demos", released by a made up label called EMI Holland.

The origins of these studio recordings are unknown, but it is said that the tapes were likely stolen from Waits' car after the premiere of Wilson's play in 1992.

According to the I Hope That I Don’t Fall in Love With You singer, he had to buy a copy himself years later, in order to remake them for the final album.

"When we were doing the songs, all the tapes were in my briefcase. My car was broken into and someone stole the work tapes of the show. They realised they had something that might be worth some dough so they ransomed it, and I paid $3,000 to get it back," said Waits.

"Not a lot of money, was it? I was a little insulted," he joked.